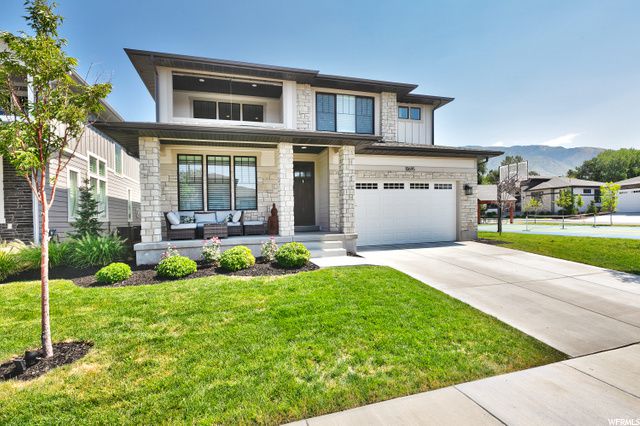 This property is not currently for sale or for rent on Trulia. The description and property data below may have been provided by a third party, the homeowner or public records.
Located along east benches of Sandy, across from the beautiful Dimple Dell recreation area, this light and bright home is full of high-end upgrades and options. Euro glass shower, gourmet kitchen with oversized island are complemented by the 9 foot ceilings throughout, $25k Hunter-Douglas blinds package and the recently finished oversized garage (complete with painted drywall, heating/ AC, and high clearance garage door) Do you love yard work? ... If so, then this home isn't for you. Maintenance free HOA living, so you can spend your time enjoying the nearby mountains and recreation instead of spending your Saturdays mowing the yard. 4,000+ square feet of basically new construction (built in 2017) in one of the best areas in the Salt Lake Valley. Price this out if you're considering building, this property cannot be duplicated in this area for this price point, an exceptional value! Call now for more information or to arrange a private tour. Don't forget to view the Matterport tour attached to the listing. 2020-11-16

For homes in 84092
*Based on the
Trulia Estimate

These are the assigned schools for 10695 S Dielsdorf Rd.
GreatSchools ratings are based on test scores and additional metrics when available.
Check with the applicable school district prior to making a decision based on these schools. Learn more.

What Locals Say about Sandy

Do legal protections exist for the LGBT community at the state level in Utah?