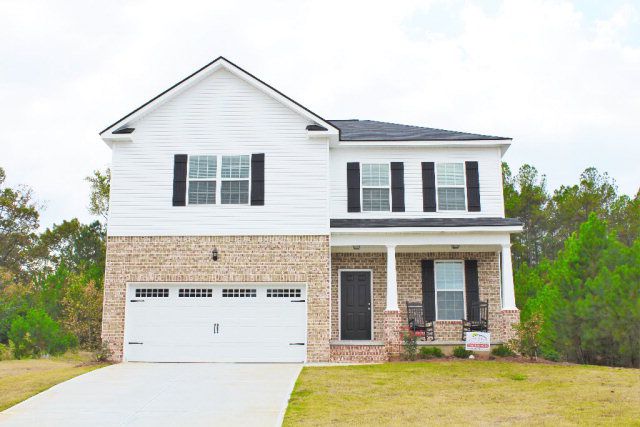 This property is not currently for sale or for rent on Trulia. The description and property data below may have been provided by a third party, the homeowner or public records.
2017 house with spacious living area with a wood-burning stove on corner hearth. The kitchen includes granite countertops and two walk-in pantries and a larger entryway with a garage, a half bathroom and coat closet. Stairs open to a large hallway/landing leading to second floor. Second story includes a linen closet, a laundry room with room for shelving, a full bathroom, three bedrooms as well as a large spacious master suite. Master suite (4th bedroom) provides two walk-in closets, private bath and an additional linen closet. The backyard is fully fenced in with a high wooden fence and a metal interior fence around the garden - perfect for dogs of all sizes! A large spacious shed is included with a ramp for additional storage or for lawn, gardening, or recreational equipment. House is a short 1/2 mile walk from the quaint town of Harlem, GA. Property is situated in a quiet neighborhood on a dead-end road.

Renter expected to provide security deposit of $2,500 as well as the first and last months rent up front. Tenant to set up and pay the following utilities: water (Columbia County) , power (Georgia Power) and trash (City of Harlem). Absolutely no smoking allowed! Pets accepted with a non-refundable $2,000 pet fee.

For homes in 30814
*Based on the
Trulia Estimate

These are the assigned schools for 107 Oliver Hardy Ct.
GreatSchools ratings are based on test scores and additional metrics when available.
Check with the applicable school district prior to making a decision based on these schools. Learn more.

What Locals Say about Harlem