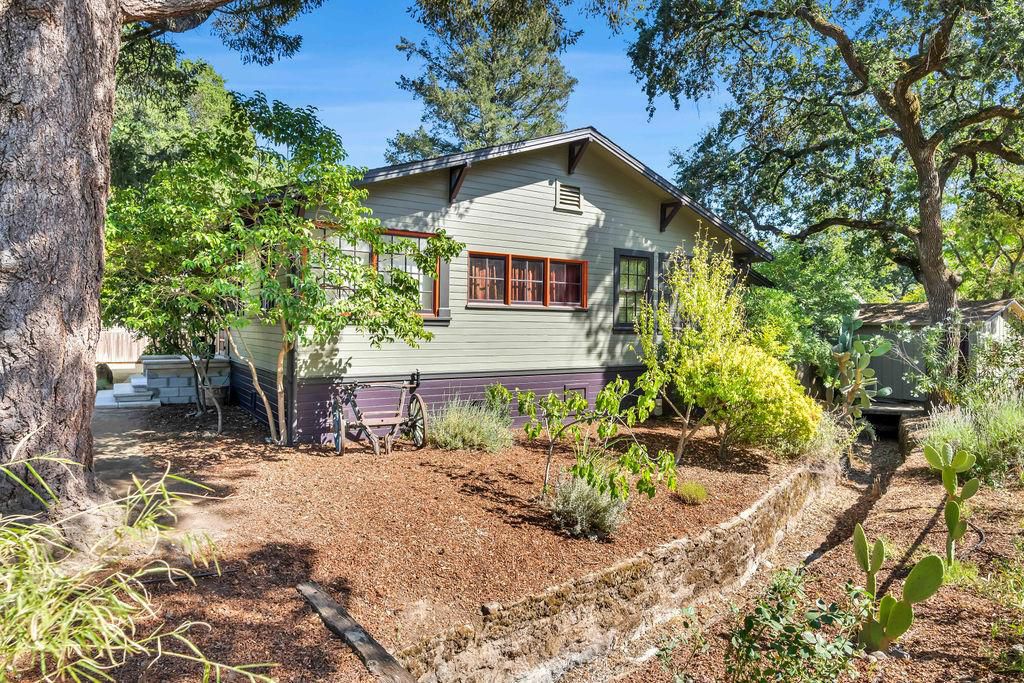 (707) 505-9740
This charming property features a 2 bed and 2 bath main house plus two detached cabins, each with a bedroom inside. The house is a Sears kit home, and built with a large "sleeping porch" for the warm evenings. Because it was used as a vacation home in a time when steamer trunks and armoires were used for clothing and personal items, there are no closets or countertops built into the home. The owners have kept the original character and charm of this vacation bungalow while updating the interiors and creating two charming outbuilding cabins in the garden for guests, office space, etc.

The home has only had four owners since 1909. The current owners have owned the home since 2004 and have hosted many charismatic guests over the years including writers, musicians, dancers, filmmakers, physicists, scientists, and human rights advocates. Solar panels, a Tesla whole house backup battery and an SAE Level 2 electric car charging station have been added to this 112 year old house that enjoys shade from a 150 year old Douglas Fir tree and a mature Oak that serve as homes for squirrels and the many birds which can be found in the backyard including jay, robins, brown towhees and finches of all kinds.

Located in Boyes Hot Springs which was known for its healing waters, used by the indigenous people who discovered and used the hot springs waters. Generations later in 1895, Henry Ernest Boyes started the Boyes Hot Springs Hotel, now the site of the nearby Fairmont Sonoma Mission Inn & Spa. The area became popular with tourists, with over 70,000 visiting each year. A railroad serviced the area during this period.

The area became a popular destination spot for vacation homes for residents of San Francisco. Our home is one of the first vacation homes built in the area in 1909 next to a seasonal stream(arroyo) that runs to Sonoma Creek during the rainy season. The original deed of sale states that it was sold for ten gold dollars to a gentleman in San Francisco under the condition that it was not to be used for brothel or bootlegging activities, which were popular at the time in nearby El Verano.

The neighborhood offers a cafe, restaurants and food trucks, post office, retail and thrift stores and the Fairmont Sonoma Inn and Spa, all within walking distance. The neighborhood is affectionately known as "the maze" and features winding streets heading up into the hills between Agua Caliente Canyon and Mission Highlands. The pleasant walking loop up Los Robles Drive and down Calle del Arroyo is used by dog walkers and families enjoying the cooler morning and evening temperatures. There is a resident deer herd that can be seen if you're lucky, as well as the occasional skunk, possum or raccoon.

TIP:Try to keep your rent within a third of your gross household income. Learn why in our Renter's Guide.
For this property
$151,200 PER YEAR
is the suggested income
Win over prospective landlords with your smart budgeting. As a good rule of thumb, ideally you would have at least three times your monthly rent in combined household income.

What Locals Say about Sonoma

Gender Identity
Yes
Sexual Orientation
Yes
Protection from being unfairly refused services or entry to or from places accessible to the public (retail stores, restaurants, parks, hotels, etc).
Learn More about local legal protections
LGBT Legal Protections updated by Movement Advancement Project
This home in Sonoma, CA is a 3 bedroom, 1 bathroom, 1,188 sqft single-family home built in 1925. This property was listed for rent for $4,200/month on Jul 28, 2021.