Along the banks of North Carolina’s French Broad River, seven miles outside of Asheville, the very first neighbors in a housing development called Olivette have shuffled their furniture and boxes out of moving trucks and into their brand-new homes.

These buyers weren’t drawn by the golf course or community pool—because Olivette doesn’t have those things. The 350-acre development is what founders Scott Austin, Allison Smith, and William Dickerson are calling an “agrihood.” What if, they wondered, we built a neighborhood around a working farm? And that’s exactly what they’ve done. 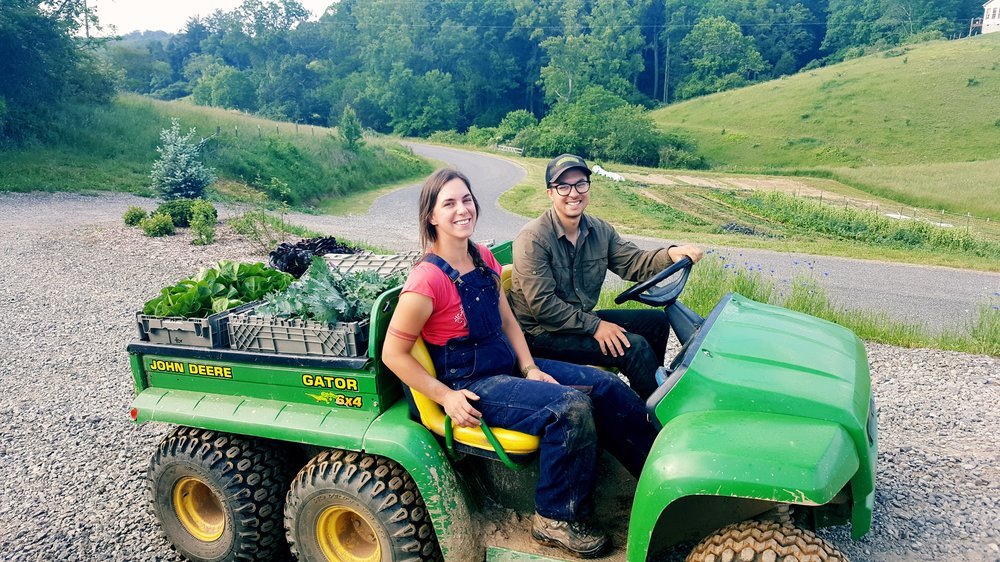 “There is a gentle pull at everyone’s heart these days,” Allison explains. “We want connection with each other and connection to the land. As gardeners ourselves, we’d noticed that there’s a vital, engaged community around growing food. So a farm seemed like a good way to create community.”

At the center of Olivette is a 46-acre organic farm that’s already growing salad greens, root vegetables, tomatoes, squash, berries, and Asian pears. Beehives are producing honey, and there are plans to add chickens, as well as goats to help trim the grass. All this creates a bucolic setting, but the farm isn’t just there to look pretty. Olivette’s early residents are already swinging by the packing shed to pick up baskets of fresh produce grown right here—just one perk of living in an agrihood. 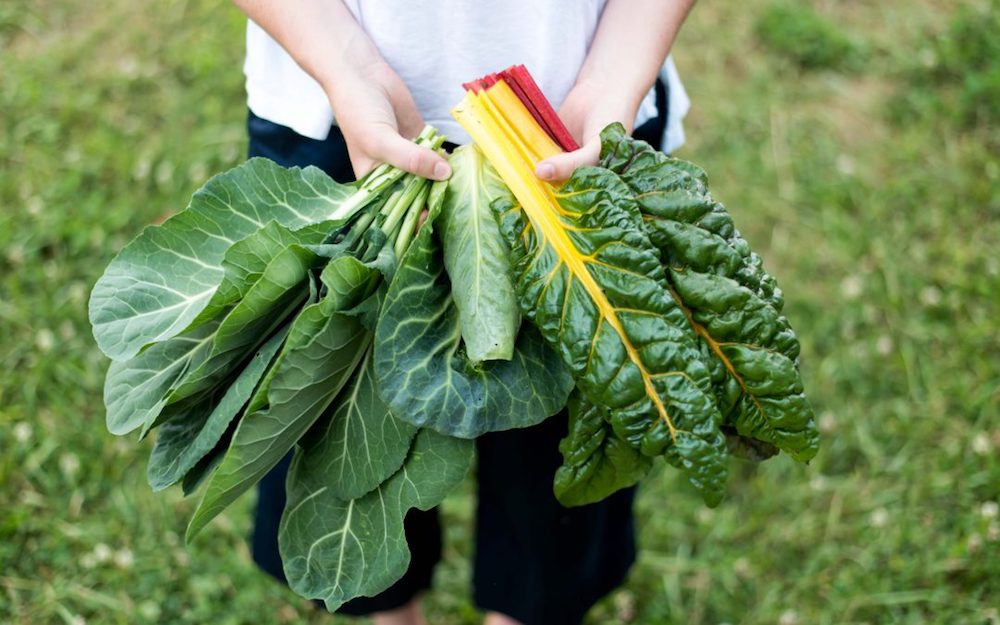 It doesn’t get any more local than this. Every resident picks up a weekly basket of produce grown right here.

And that’s just the beginning: “Soon, residents will be able to grab fresh food from a community farmstand during the warm seasons,” says William. Two full-time farmers tend to Olivette’s crops, but for residents who want to get their hands dirty, “There’s a two-acre community garden space where they can grow their own food, and we’ll never turn down an offer to help on the farm. We’ll also host farm-to-table dinners and teach people—especially kids—about growing things like fruit trees.”

Justin Aiello, the head farmer at Olivette, says, “The farm isn’t just a side amenity—we want residents to be as involved as possible. We want kids to grow up picking fresh blueberries. Already, people who have moved in have visited us on the farm, and they’ll call us up to see if we have any spinach!” 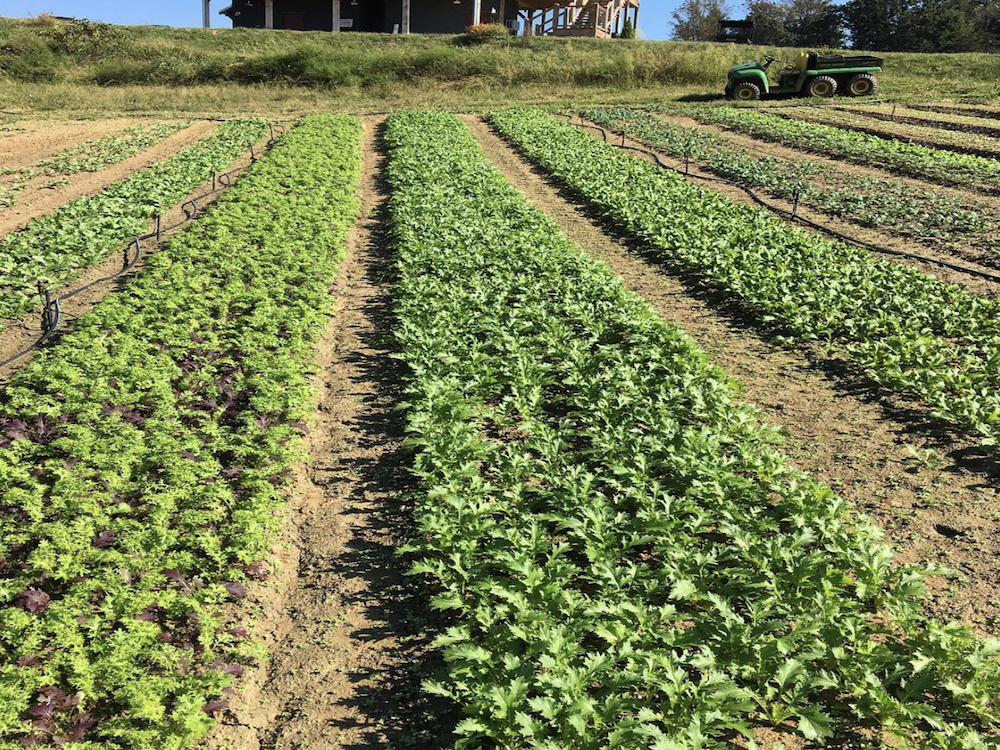 Anyone interested is welcome to help out on the farm or to plant their own plot in the community garden.

There’s no question the farm is the star here. Interest from potential homebuyers has backed up Scott and Allison’s idea that people are ready for a closer connection to the land. “Typically, the highest value property is always on the water,” says Scott. “But here, so far, most people have been interested in buying home sites that are by the farm, even more so than down by the river.” 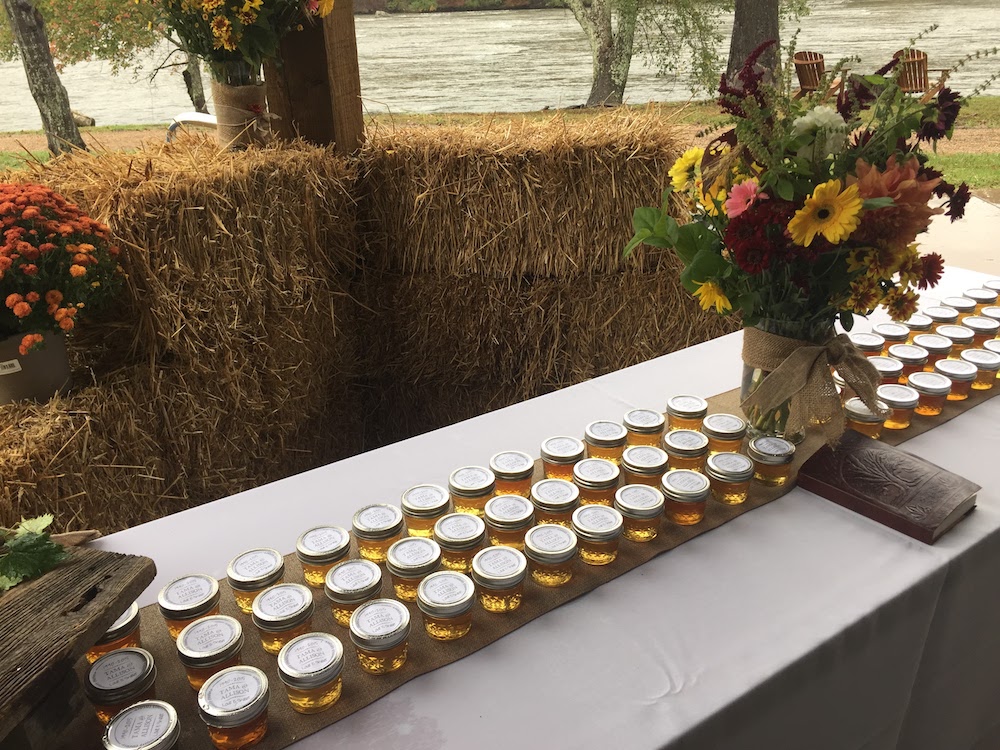 On-site hives are already producing honey, and soon chickens will provide eggs to the community.

The idea is that the farm will be a reason for Olivette’s residents to get together. “So many people today are living cut off their neighbors,” says Scott. “We wanted to create a place for what we call ‘front-porch neighbors.’ We’ll feel successful if we build a community where people know each other.” 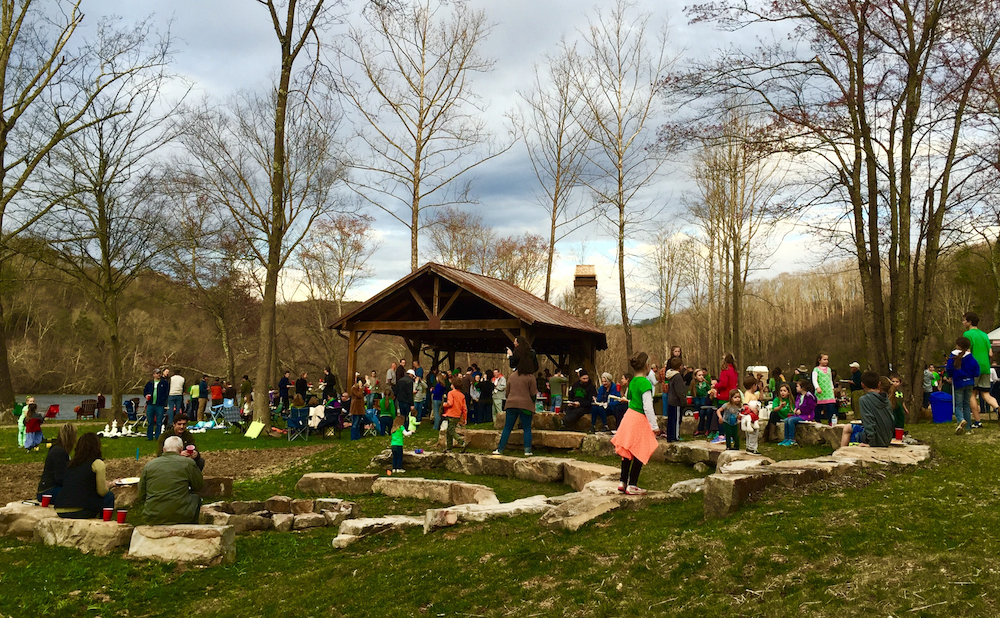 Down by the river, a pavilion, rock amphitheater, and fire pit create a gathering place for parties, live music, and barbecues.

The whole place has been designed with that goal in mind. Book clubs, exercise classes, and time on the farm—plus walking paths that thread through the property and along a mile and a half of grassy riverbank—create plenty of chances to meet face-to-face. Here and there, you’ll spot Little Free Libraries and markers that point out native and edible plants or highlight bits of local farming history. 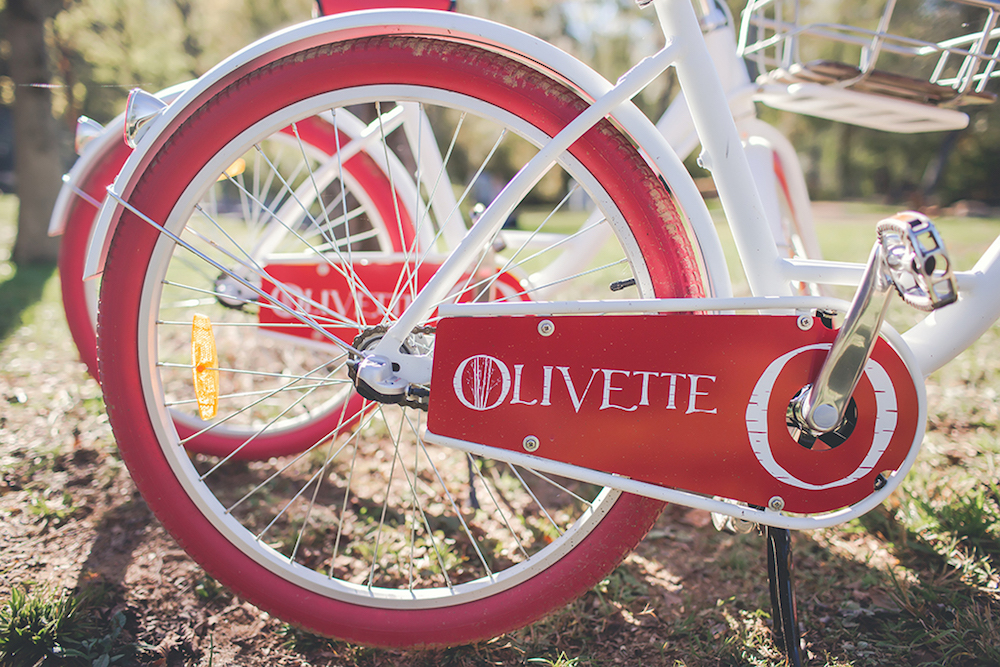 Community bikes, walking paths, and lots of open space encourage residents to get outside.

Houses at Olivette are organized into three separate “hamlets,” each with fewer than 30 homes to foster a real sense of neighborhood and belonging. They’ve been designed with relatively small yards so that most of the land would remain open to everyone. The payoff? A seven-acre riverfront park with Adirondack chairs placed to maximize the view, a barbecuing pavilion, and a private island with a rock labyrinth to explore. 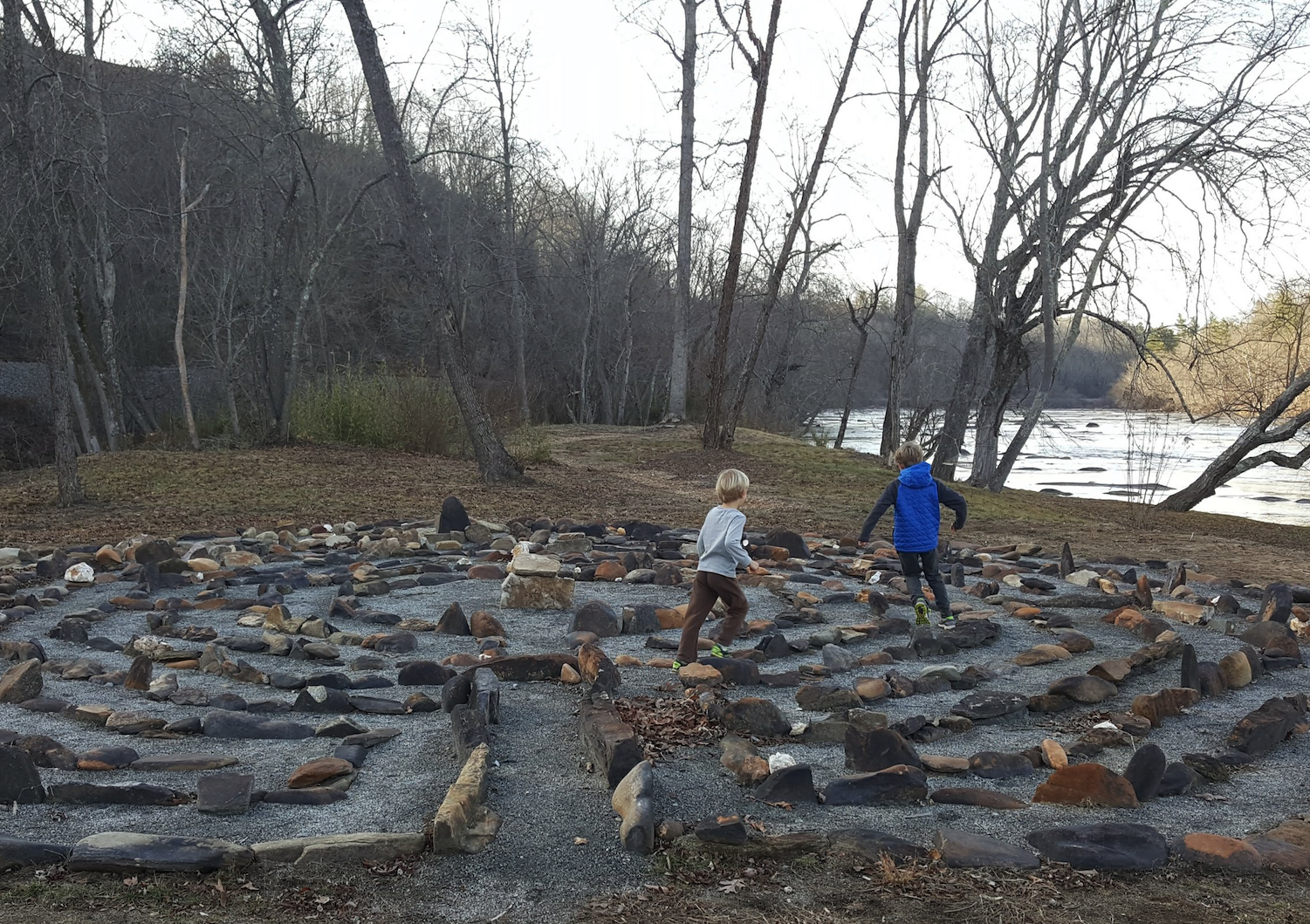 A private island in the middle of the river holds a surprise—a rock labyrinth.

Despite the focus on open space and sustainability, no one will be living in hippie deprivation at Olivette. Buyers choose a lot and then work with a building company to customize and build their home. The high-end houses, all of which are held to the gold standard of efficiency and are heated by geothermal wells, start at $650,000, well over twice as much as the county in general. 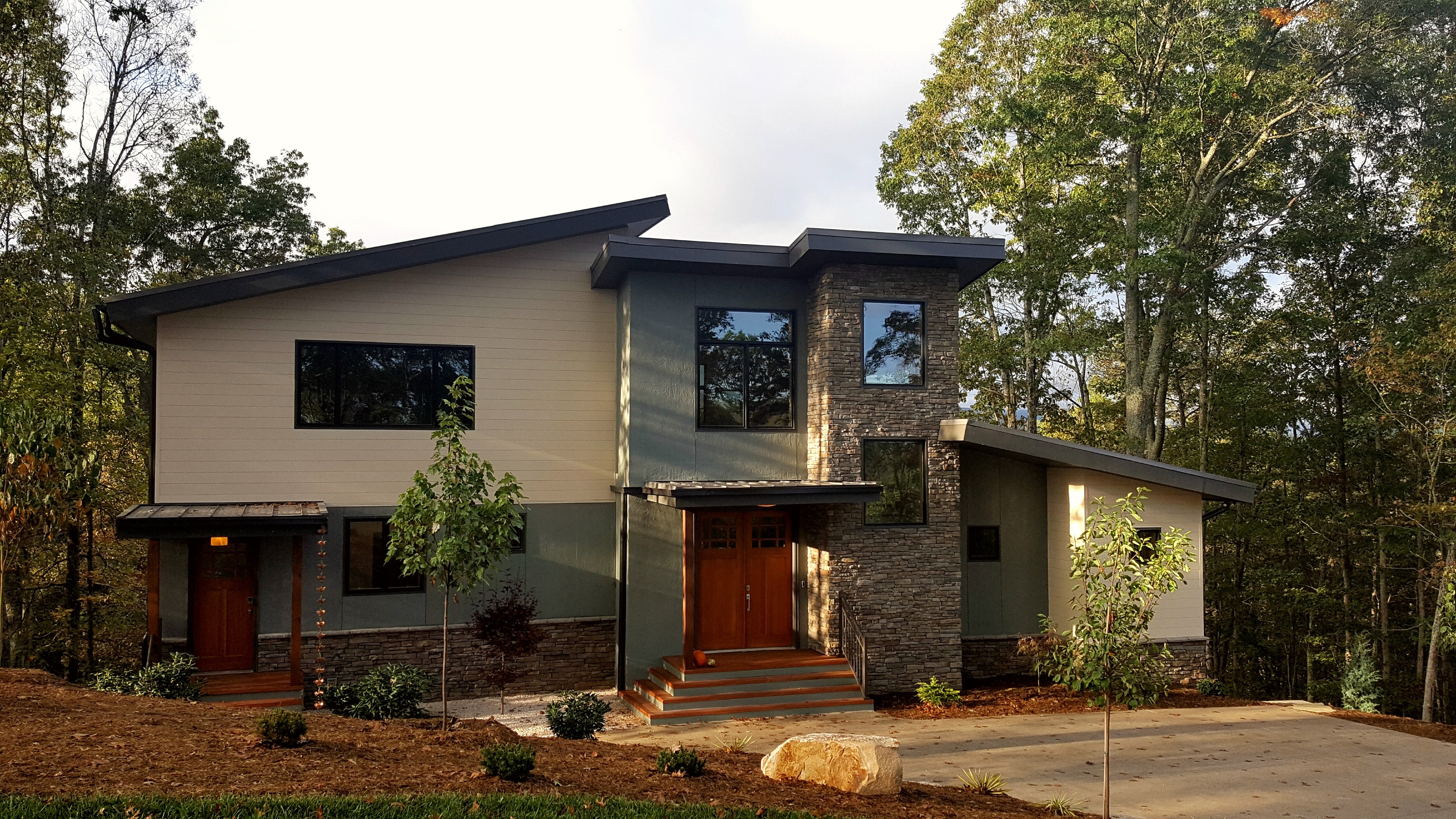 The first residents recently moved into this home, which, like every home at Olivette, comes with geothermal heating and cooling.

Still, the setting is what closes the deal: “When I first stood on the land where I decided to build my home, I literally got goosebumps!” says early resident Ginny Hunneke. “One day, I watched a pair of bald eagles fly together over the river—I can’t get over how beautiful it is here.” 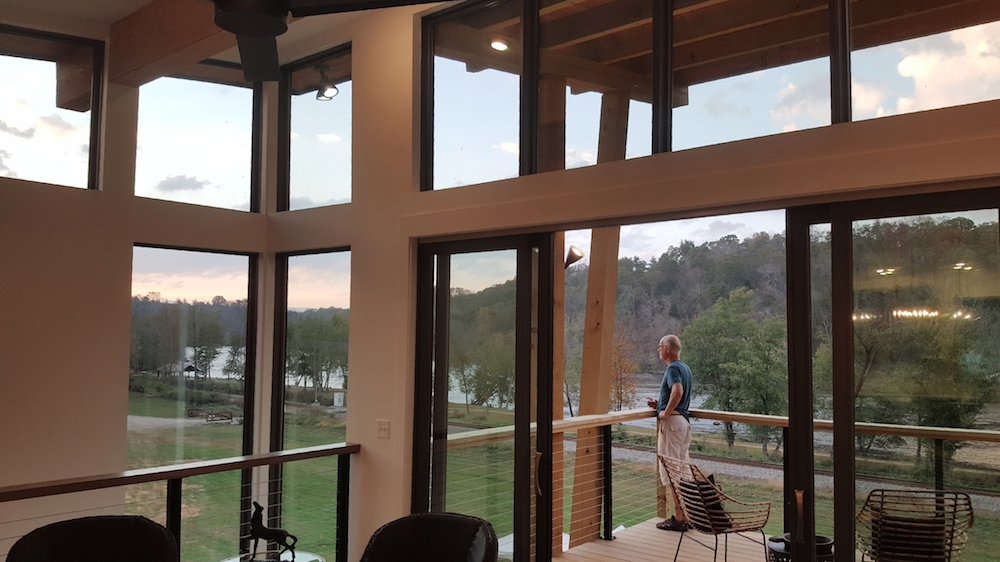 Homes in the Riverside section of Olivette border a seven-acre park with trails along the river’s edge.

This interest in living in nature is creating a bumper crop of agrihoods. According to the Urban Land Institute, more than 150 have sprung up all over the country. “It’s a strong trend,” says Allison. “There are so many more now than there were three years ago when we started this project. Even some golf communities are looking at transitioning to agrihoods, but of course they’ve put so many chemicals into the ground that it’s tricky.” 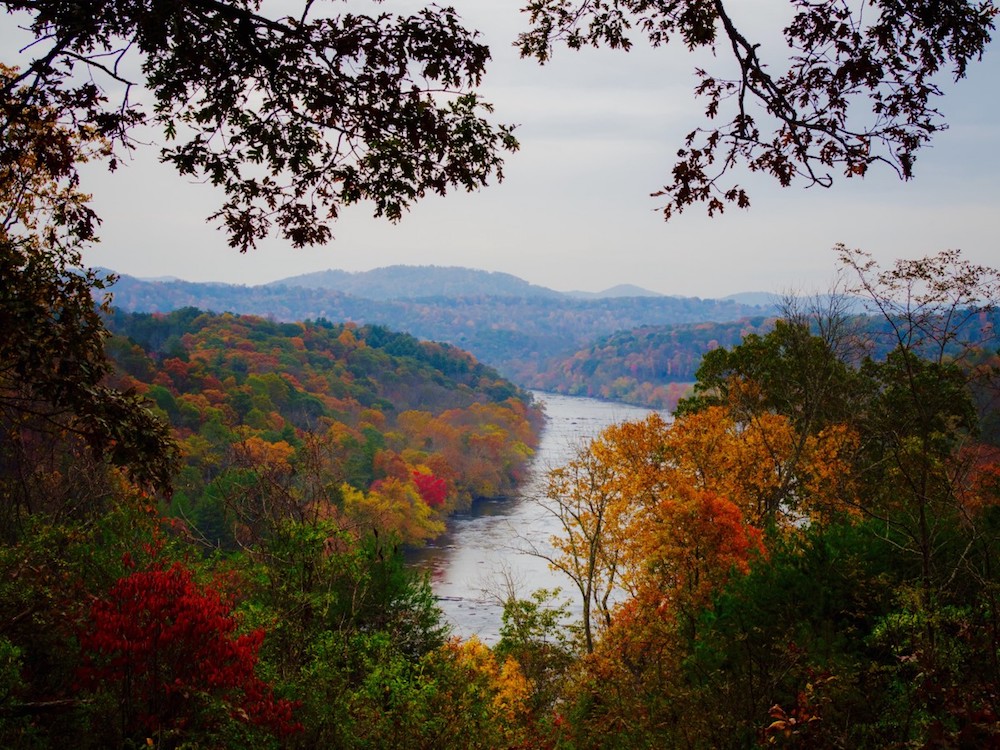 From high in Olivette’s hills, views stretch across the Blue Ridge Mountains.

Many of these agrihoods have a rural feel but sit within easy commuting distance of a city. “Being close to Asheville is a huge draw for people looking at Olivette,” Allison says. “A lot of people are relocating here and bringing their jobs with them. There’s a growth in town that’s kind of heady.” 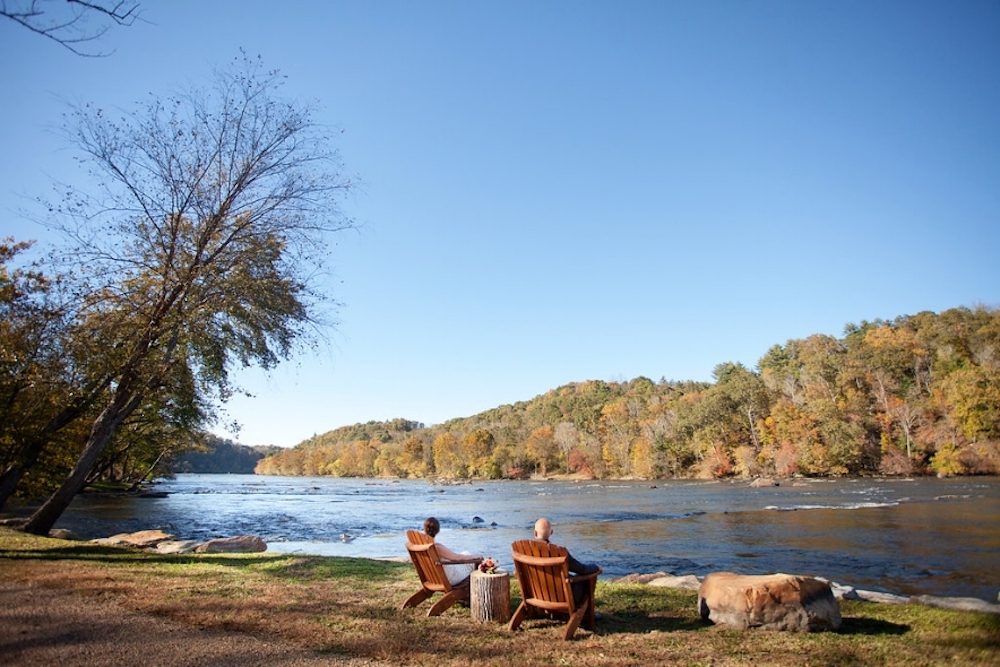 This means that agrihoods draw not just those passionate about farming, but also those who simply value living on open land and being a part of an eco-friendly community. At Olivette, there are lots of opportunities to get involved with the farm, but there’s also no actual need to ever lift a trowel. For some, says Scott, the appeal is simple: “This is a place where you come home and decompress as you look at the river, grab your dog, head out your back door onto the trails, stop at one of our meditation spots, then go home and cook dinner with food grown steps away from your home by people you actually know.” 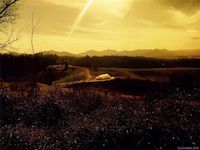 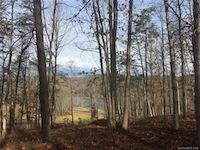 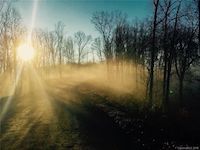 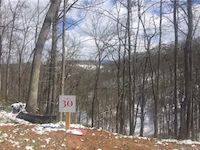 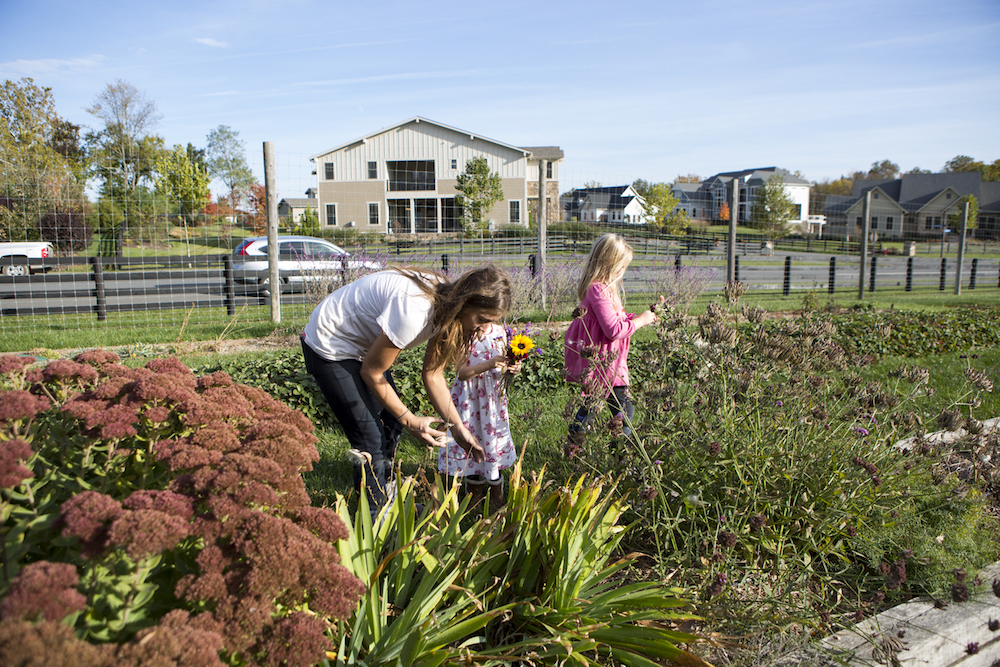 Willowsford in Ashburn, Virginia: Half of the land in this 4,000-acre development in the suburbs of Washington DC has been preserved as woodlands and other natural habitat. New homes sit near a 300-acre working farm, a farmers’ market, and a seven-acre lake. (photo: Molly M. Peterson) 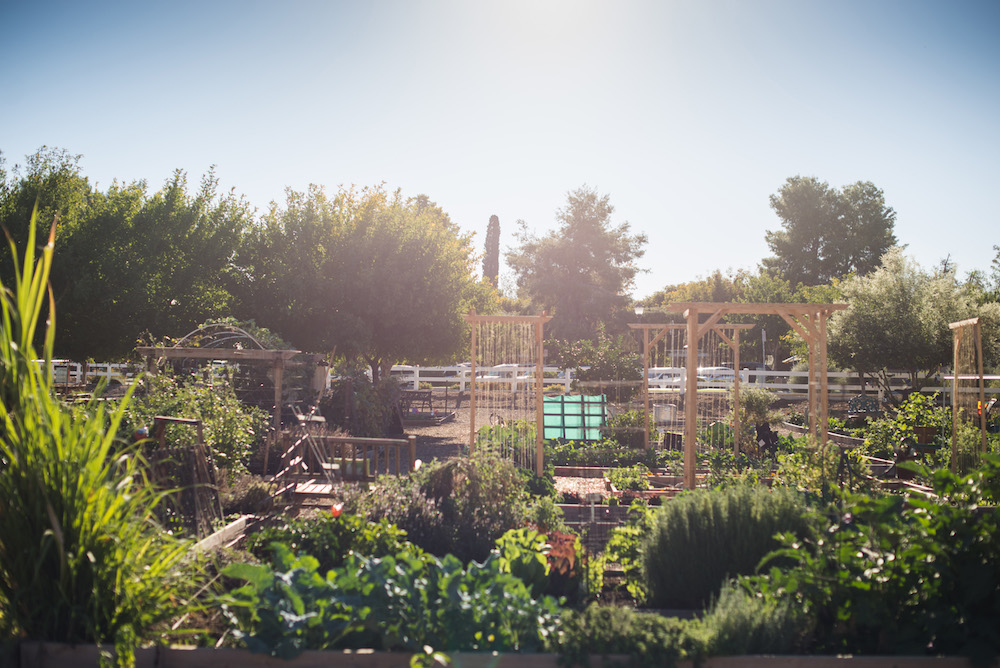 Agritopia in Gilbert, Arizona: At this development outside Phoenix, residents can pick up produce from an honor-system farm stand that’s supplied by the 11-acre farm. The community’s 450 homes have front porches and sit close to the sidewalk, to encourage friendly hellos. (photo: courtesy of Agritopia) 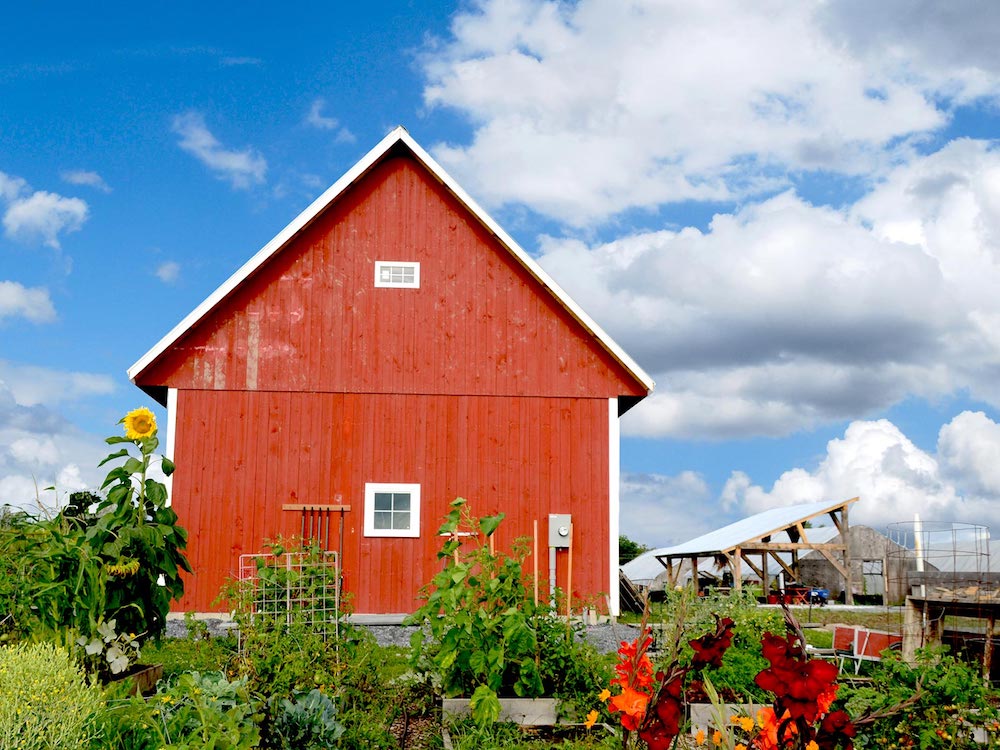 South Village in South Burlington, Vermont: From the homes in this Champlain Valley community, it’s a short stroll to pick up produce from the community gardens or the 12-acre organic farm. There are enough solar panels on-site to provide clean energy not just for South Village, but for the entire town. 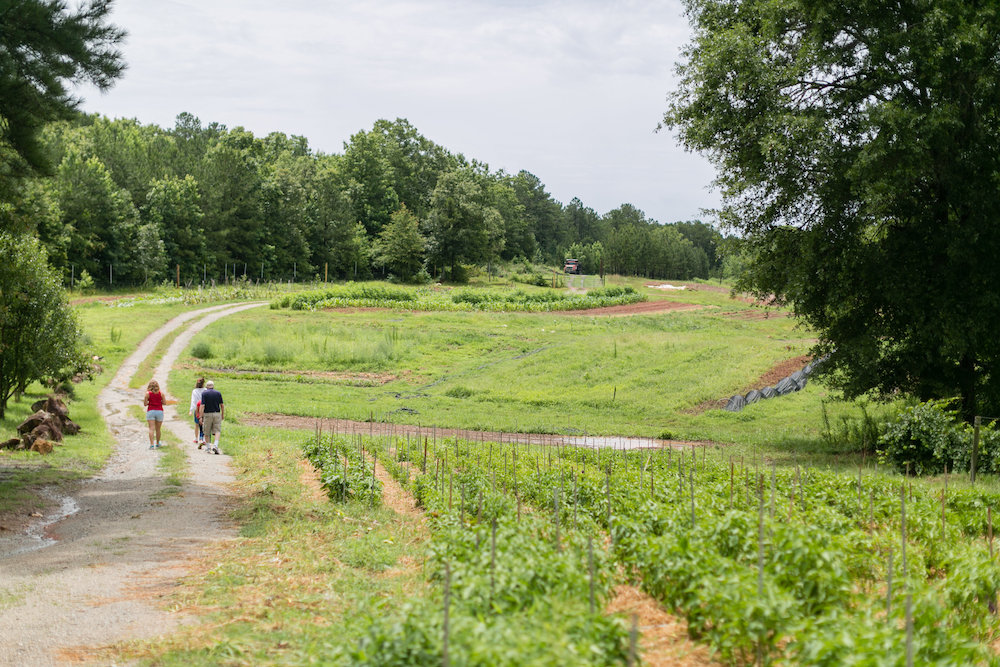 Serenbe in Chattahoochee Hills, Georgia: Forty minutes from downtown Atlanta, this 1,000-acre community of new homes and townhouses has a working farm that grows 300 varieties of veggies and herbs. Even the walking paths here are lined with blueberry bushes for an on-the-go snack. (photo: J. Ashley Photography) 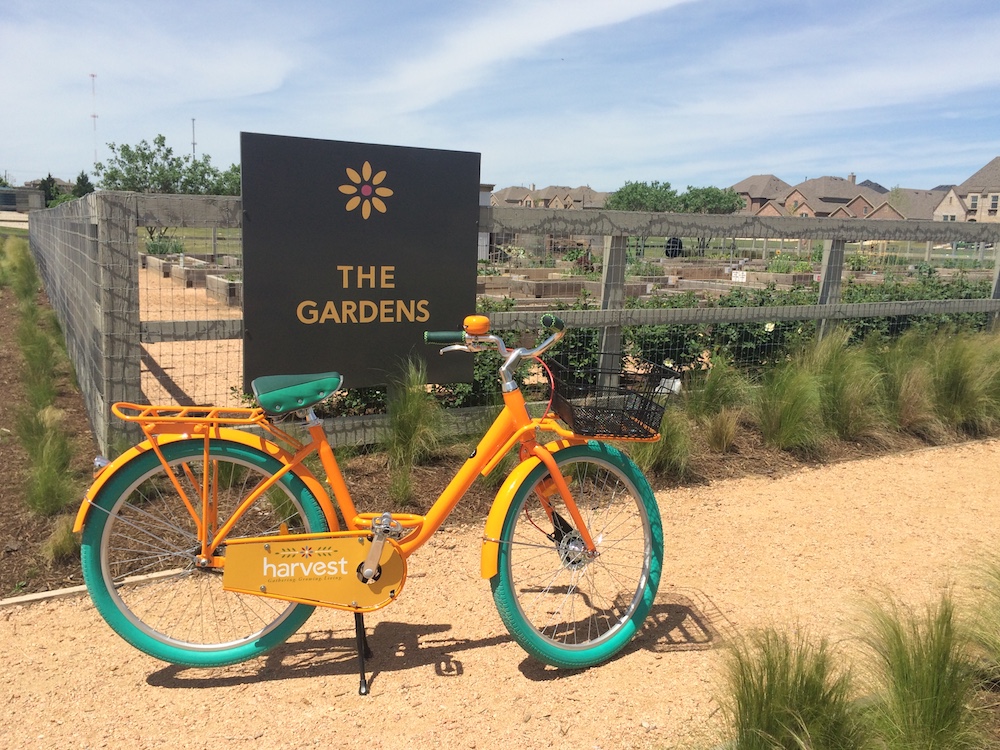 Harvest in Argyle, Texas: This 1,200-acre community is close enough that residents can commute to Dallas-Fort Worth. Weekends, they can improve their gardening skills with advice from the resident farmer, and even pitch in to grow produce for the farmers’ market or to be donated to the North Texas Food Bank.