Nobody knows how to find value in a city better than a local. This is even more true for homes: Locals are keenly aware of how to make their home-buying dollars stretch farthest. We mined Trulia data looking at how locals search for a home in one city, San Francisco, where inventory is notoriously low and home prices notoriously high. In this challenging place, where are locals flocking to? We investigated to find out where San Franciscans are searching for homes in the city and in the greater SF metro area. The data gave us an answer, but we wanted more. So we talked to the people living in those top-searched places to understand these local treasures.

A local surfer strolls toward the water for a morning session at Ocean Beach.

Though the median home prices listed above don’t exactly read as bargains, 94122 is still a relative deal compared to other San Francisco neighborhoods. The price per square foot in the Outer Sunset is up 19 percent since last year, but even with that increase, what sets the Sunset apart is that you can still find a home for $1 million dollars (an increasingly rare event in San Francisco).

The Sunset has a comparatively higher inventory of single family homes with private backyards, a true urban luxury. More space helps make up for a generally long commute: a nearly 45-minute N Judah streetcar ride to get downtown. For those wanting to be closer in within the Sunset, narrowing commute times costs you. The more heavily commercial Inner Sunset has a higher median home price of $1.7 million dollars, while the more remote, beachy Outer Sunset is where you’ll likely find better deals. 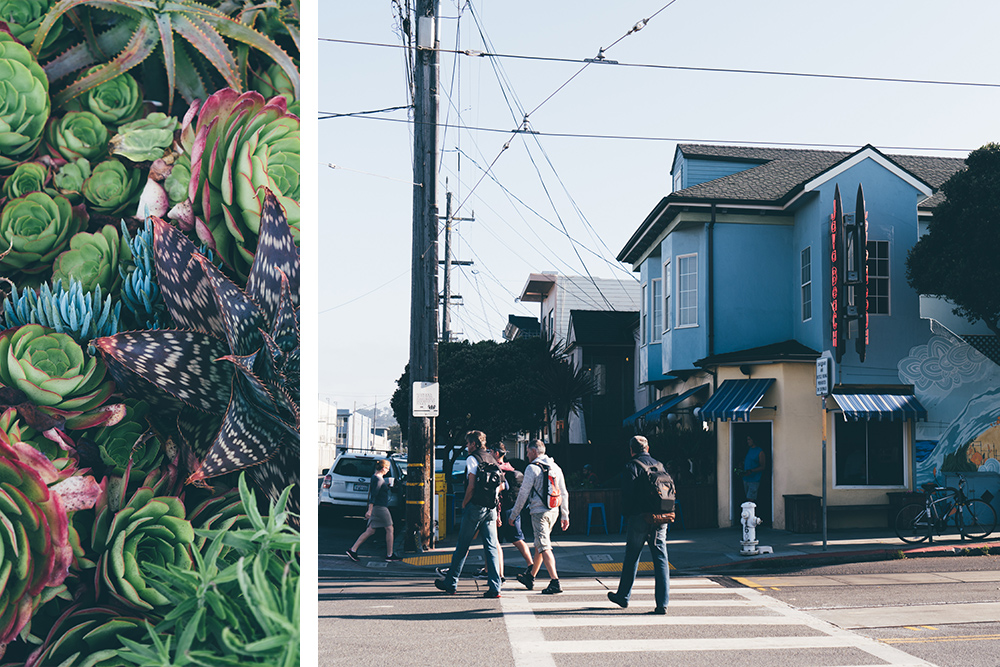 Left: One of the many succulent gardens that line the houses along the Great Highway. Right: Morning commuters walk to catch the N Judah streetcar at the end of Judah St.

What makes the Sunset so special to the people who live there? Peter Fish, a longtime editor, and his wife, Nancy, bought their Sunset home over 10 years ago. At first, affordability brought them to the neighborhood, but over time they’ve happily embraced its unique character. “I’ve come to love walking Ocean Beach,” says Peter. “From there I’m just a few blocks away from my favorite shops, General Store and Mollusk, a surf shop.” Mollusk, which also has locations in Venice Beach and Silverlake, is a defining shop in the neighborhood, a meeting place for the Sunset’s local surfers.

Peter and Nancy also appreciate the Sunset’s restaurant scene. “This neighborhood can feel remote, but less so when you realize you’re only steps from great food,” Peter says. Some local favorites? Devil’s Teeth Baking Company for $1 beignets (available only on Sundays) and San Tung’s legendary fried chicken wings.

San Tung’s is a neighborhood fixture, where locals happily brave a two-hour wait for takeout on Sunday evenings. The 27-year-old restaurant is run by Mrs. Chu, her son Frank Chu, and their 17 person staff. While local magazines love to focus on the surfer contingent, according to a report published by the San Francisco Planning Department in 2011, 48% of Sunset residents are of Asian descent. The international influence of Chinese immigrants is as distinctive as the area’s cooler Sunset weather. A stroll through the Inner Sunset feels like an escape to a totally different world.

Did you know that locals call it “South City”? Clarence Kong, a 35-year-old Lyft driver, is explaining what locals call South San Francisco, a place he’s lived since his family moved from the Philippines in 1998. “It’s just easier.” When asked about what he likes best about South City, the answer is simple:  “The weather, the people, and that it’s close. You can get anywhere from South City.” In the past, if you asked a San Francisco local about South San Francisco, you’d hear grumbling about train delays on the way to the airport. Today, people are moving to South City for access to that same BART train. With 1,000 more residential units being built over the next three years, South San Francisco is ideally placed for transplants flocking to the Bay Area for work. The town itself, an eclectic mix of styles resulting from slow development over decades, still offers single-family homes much cheaper than crazy San Francisco prices. Some brick homes date back to the early 1900s, while others are 1950s ranches or circa 1980s two-stories rambling in the foothills and on golf courses. These days you’ll see the latest sleek 21st century units mixed in. 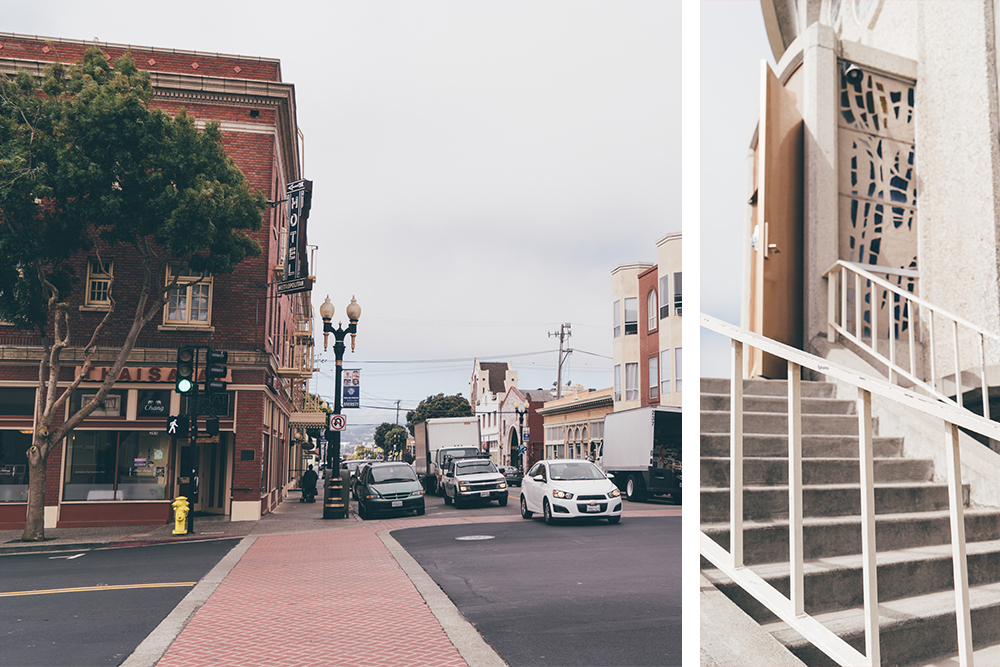 Left: Brick buildings and crosswalks decorate the intersection of Linden and Grand. Right: A local church and architectural gem close to downtown.

In the numbers game of Bay Area real estate, South City is a win-win: Residents decrease the time they spend commuting and dollars they spend to live there. Here are some stats to bear it out: While San Francisco averages $1,049 per square foot, South San Francisco is around $650.

For transplants working in Silicon Valley, the location couldn’t be better. Right off 101, South San Francisco is on the way to the peninsula where many tech companies are headquartered. It’s both a 25-minute drive to San Francisco’s South of Market district and a 45-minute drive to Google headquarters in Mountain View. And South San Francisco itself is becoming a burgeoning biotech corridor, anchored by Genentech’s headquarters, on the city’s marshy east side in an area called Oyster Point. New development abounds, including a multi-use 7-building complex called “The Cove,” housing, among other things, Foundry & Lux, a recently-opened public restaurant, and adult “playground” with games including bowling and bocce.

South City is still a bit of a concrete jungle. Remember the Hollywood-style sign you’ve likely seen on your drive in from the airport? It is a visual reminder of the working-class history of this “Industrial City.” Some locals want to get rid of the sign, but this same lack of pretension appeals to other home buyers. Writer Adam Fisher, who lived in South City from 2011 to 2015, says, “All the unpretentious small-town, working-class vibes in San Francisco left long ago—and wound up in South San Francisco. I liked that.” 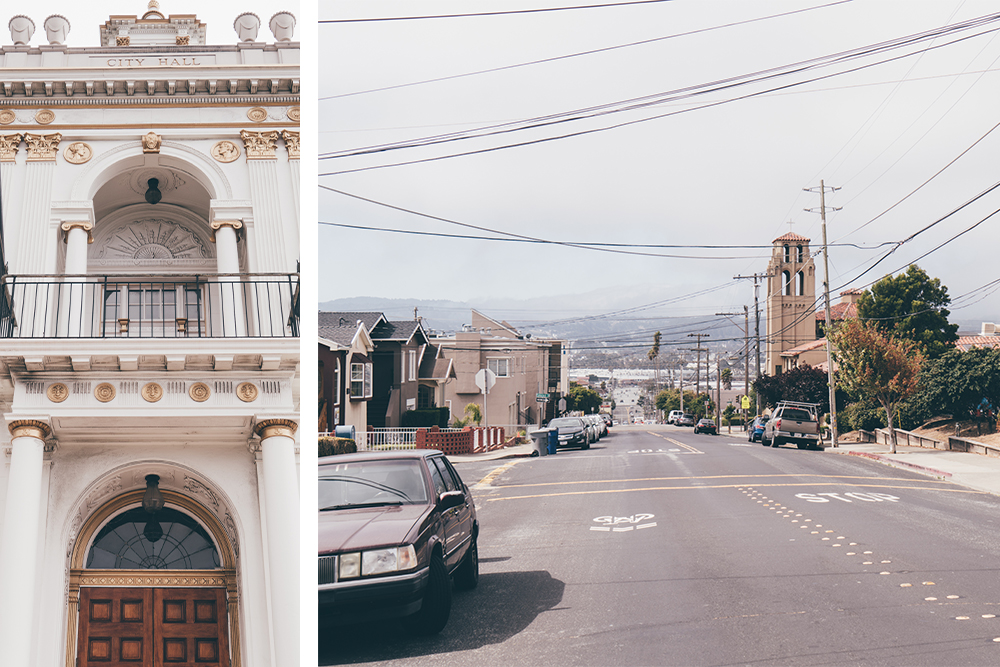 Left: South San Francisco’s City Hall has retained all of its 1920’s charm. Right: Looking south into the mist from one of the many quiet residential streets.

“When we lived in South City, we hiked San Bruno Mountain butterfly preserve at least once a week,” says Fisher. “It’s lovely. I’ve seen it referred to as the largest open space on the peninsula not counting the watershed.” In fact, that mountain that holds the “Industrial City” sign high in the air is buckled with hiking trails that lead to panoramic views of the Bay Area.

Kong agrees: “I like to go hiking where it’s always sunny, not foggy. It’s an easy drive to Maori Point, where I walk my dogs and fly my drone.” South City holds an appeal for buyers who want to be close to nature. The beach at Oyster Point Marina and Park is perfect for relaxing and watching the waves.