Think you live in one of the most hungover cities in America? To find out which cities in America are most likely to overindulge this New Year’s Eve, Trulia scoured the neighborhood amenities data on our site, which comes by way of Yelp, to find out which cities have the most breweries, bars, and general nightlife per 10,000 households. Then we layered on areas with the highest number of comfort food restaurants and drugstores (for maximum morning-after recovery) to calculate the Trulia “Hangover Index.”

While homes for sale in San Francisco, CA, the number one city on our Hangover Index, boast listing prices high enough to induce a headache (no champagne required), other cities on the list, like Worcester, MA, and Portland, OR, boast real estate listing prices a bit closer to national averages. Is your hometown on the list of most hungover cities below? Bottoms up!

Which U.S. cities are most likely to reach for a bottle of aspirin and a greasy meal after partying on New Year’s Eve? San Francisco tops the list. That’s right, not only do those looking for a home for sale in San Francisco have skyrocketing real estate prices to contend with, but they’ll also be battling a hangover come New Year’s Day — there are a whopping 28.8 nightlife establishments and bars per 10,000 households in Trulia’s hometown. Boston, MA, and Las Vegas, NV, round out the top three cities, ranking 31.8 and 31.6 respectively on the Hangover Index.

The least likely to suffer on New Year’s Day? Southern cities like Columbia, SC, and Memphis, TN, scored much lower on the Hangover Index, while Birmingham, AL, scored the absolute lowest — a mere 11.7. (Compare that with hard-partying San Francisco’s score of 41.7!) 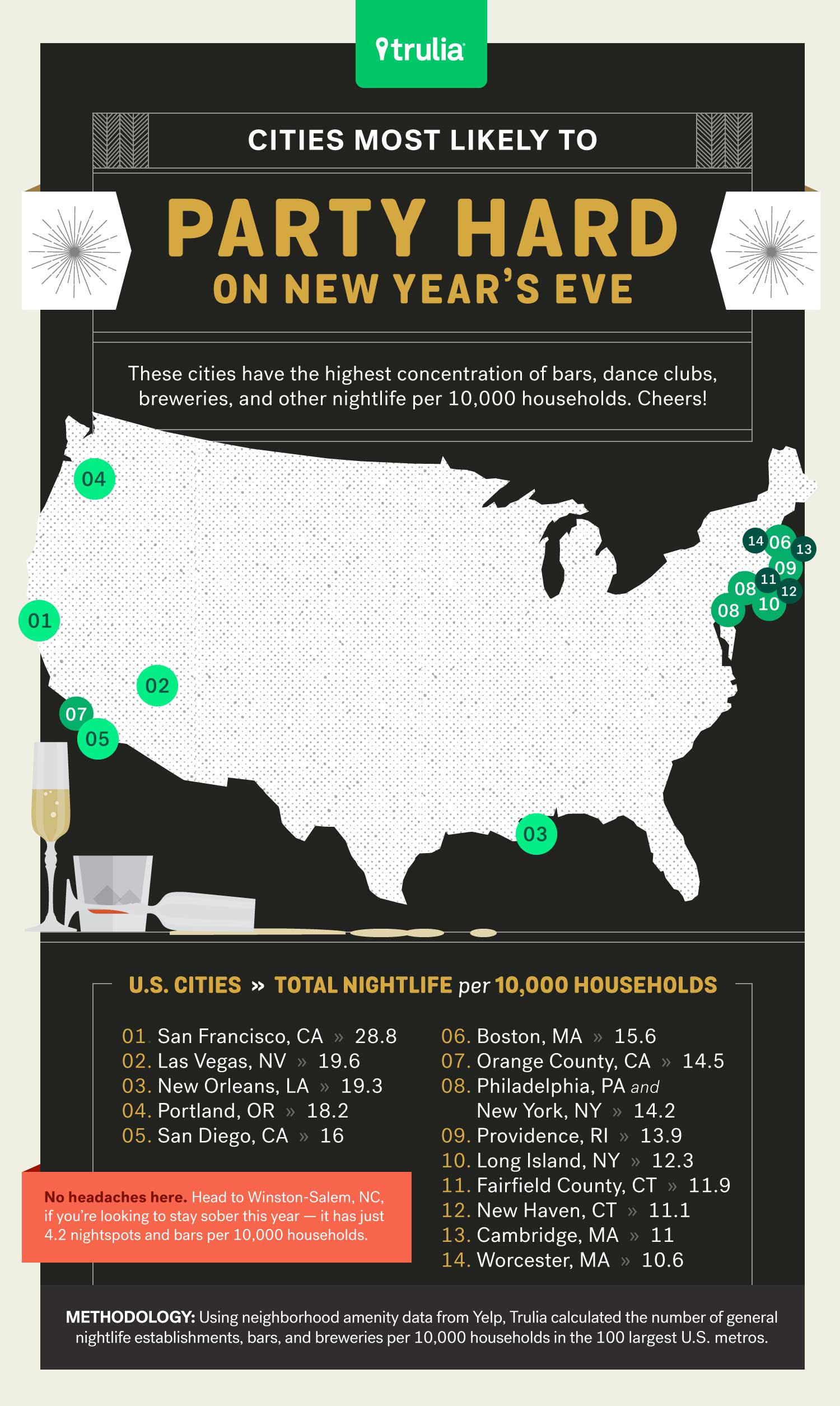 What do you need to score as one of the most hungover cities in America? Lots and lots of nightlife. Not surprisingly, Las Vegas, NV and New Orleans, LA are runners-up to San Francisco, the #1 party town on our list. But plucky Portland is a fast follow, with 18.2 nightlife establishments per 10,000 households. Philadelphia, PA, and New York, NY are tied with 14.2 hot spots each!

Teetotalers looking to ring in the new year sans alcohol may want to consider homes for sale in Winston-Salem, NC. Not only are real estate prices more modest there than in the hard-partying locales, but also there are a scant 4.2 bars and nightspots per 10,000 households. 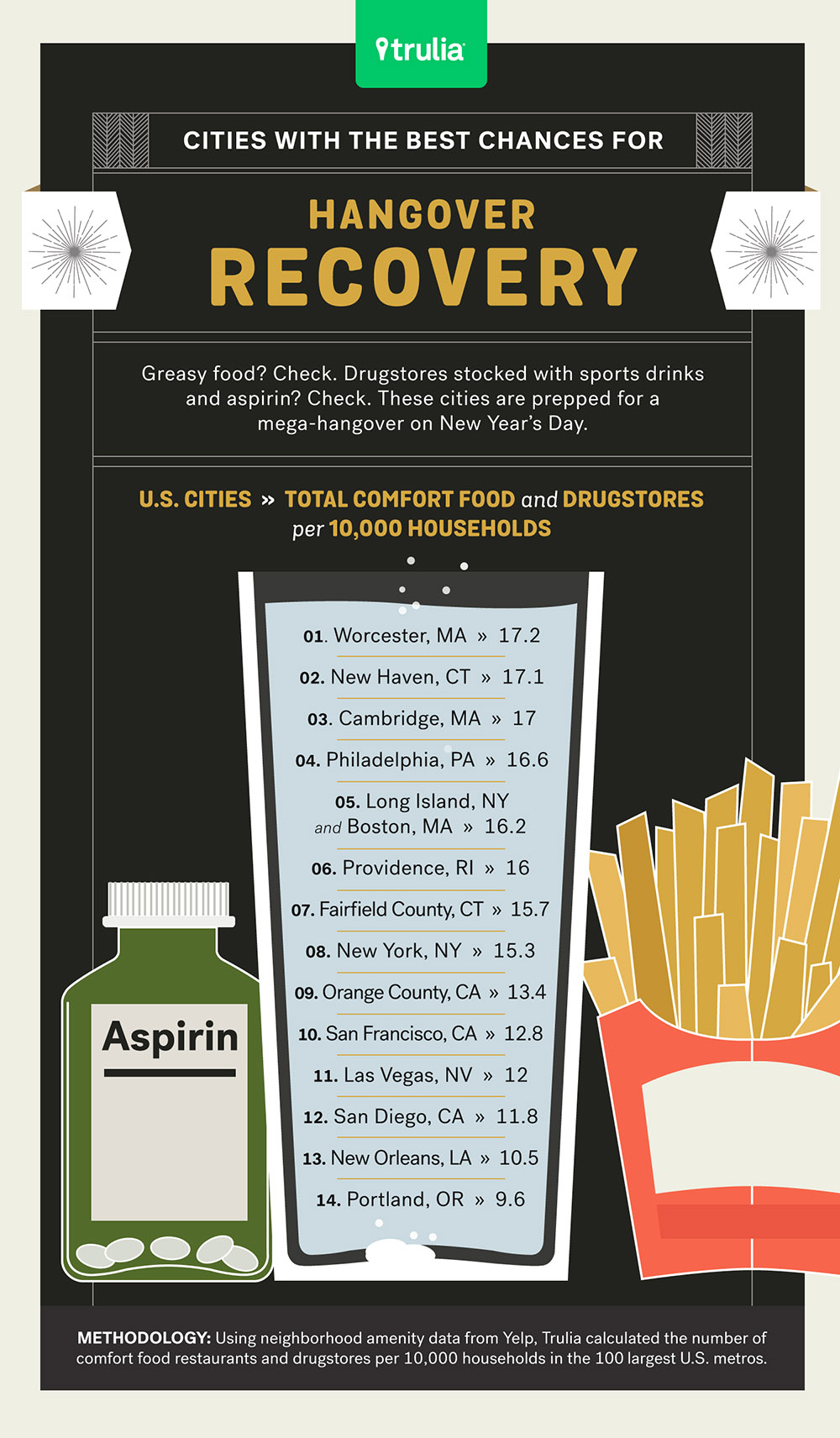 Which hungover cities are best prepared to recover?
Drugstores stocked with aspirin and electrolyte-infused energy drinks? Check. Greasy spoons serving up quality comfort food? Check. If you find yourself suffering in one of the most hungover cities in America this New Year’s Day, better hope it’s one of the ones on this list. Surprisingly, Worcester, the #1 city on our hangover recovery list, is #14 on the overall Hangover Index — and San Francisco, the #1 city on our Hangover Index, is #10 on the recovery list. Guess you can party hard or recover well, but not in the same city.