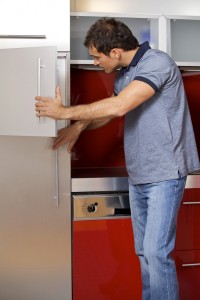 Think back to the last time you visited an open house. Did you encounter one of “those guys”?

You know who I’m talking about. The entitled, annoying, dirty ones. The ones who everyone else is quietly hoping will leave.

Wait — do you not know what type of person I’m talking about? Ah, then this will be fun.

Let’s make a list of nine open-house faux pas that you should avoid … so that you don’t turn into “that guy.”

1. Don’t act as though you’re at a playground

Some open-house visitors seem to forget that they’re inside someone else’s home. They’ll snoop through drawers and closets, slam doors, break lamps. They’ll act as though they’re at a playground, rather than at another person’s home.

Instead, act as though you’re an invited guest at someone’s private residence. (Because you are.)

2. Don’t lose track of your children

“Those guys” at the open house completely lose sight of their children the moment they step onto the property. The kids will tromp across the white carpet with muddy shoes, play football near the antique china cabinet, and jump on the furniture. Meanwhile, the parents remain oblivious.

Again, this isn’t how you’d behave if, say, your boss invited your family to his home for dinner.

3. Don’t mess with lights and doors

Likewise, if a doorway was closed, don’t leave it open. This is especially true for exterior doors, as the seller’s pets could wander outside.

4. Don’t leave your belongings strewn about

Yes, you want to take off your jacket. But don’t just dump it on the couch. And, yes, you’re tired of carrying that wet umbrella. But don’t just leave it in the entryway.

Ask the real estate agent if there’s a place where you might be able to keep your umbrella, rain boots, or jacket. And if there isn’t … carry your own things, instead of dumping them somewhere.

Does this really need to be spelled out? “Those guys” at the open house are the ones who show up at the doorway with their shaggy border collies and then casually ask, “Is it OK if Fido comes inside?”

No, it’s not OK. The seller might be allergic to pets. Or they might not want a stranger’s dog tromping across their carpet. Avoid the awkward question: Leave your pets at home.

“Those guys” at the open house are the ones who pick up an item — perhaps a vase, or a planter — and then put it back down in a completely different location. Sometimes, they’ll carry the item into another room to show it to a friend. Other times, they’ll mess with the item (perhaps looking for the label).

In fact, while we’re on the subject: Just don’t pick up any personal possessions. You’re interested in buying the house, not the Ming vase, so save your interest in antiquities for the showroom.

7. Don’t use the bathroom without asking

As a general principle, it’s considered polite to ask permission before using the restroom. This is extra-important if there’s a chance that the seller may have already moved out and turned off the water, resulting in a plumbing catastrophe when you try to flush the toilet.

And don’t change your baby’s diaper in the bathroom. You don’t live there … yet.

8. Don’t steal anything (including food)

The real estate agent might be offering brokerage-branded pens or notepads as a giveaway, but that doesn’t mean you can also help yourself to the stack of National Geographic magazines sitting nearby. The agent may have baked cookies for open-house visitors, but that doesn’t mean the bowl of fresh fruit in the kitchen is also up for grabs.

If you have any doubts as to what’s a freebie and what’s not, ask the agent.

You’re looking at the seller’s family photos, and you think that their daughter’s punk-rocker mohawk is hideous. But that doesn’t mean you should express that thought out loud.

Likewise, you might think the seller’s decorating choices are tacky. But you don’t need to make any snide remarks. After all, you’re thinking about buying the house. You’re not contemplating hiring the seller as your interior decorator.

Keep your commentary about the seller’s taste, style, and family to yourself. Compliments are welcome; unkind comments are not.