Setting real estate prices isn’t an exact science, but it can come close. Real estate agents look at recent sales that compare with your home to gauge market prices and consider lots of other factors when determining how to answer that common seller question: How much is my home worth?

But things like marketing psychology, cultural traditions, and even superstition can also play into listing prices. After culling through the asking prices of homes for sale on Trulia since 2011 (excluding foreclosures and listings that end in zero), we found that some numbers are pretty popular when it comes to pricing real estate.

Wondering how to put house numerology to work for you? 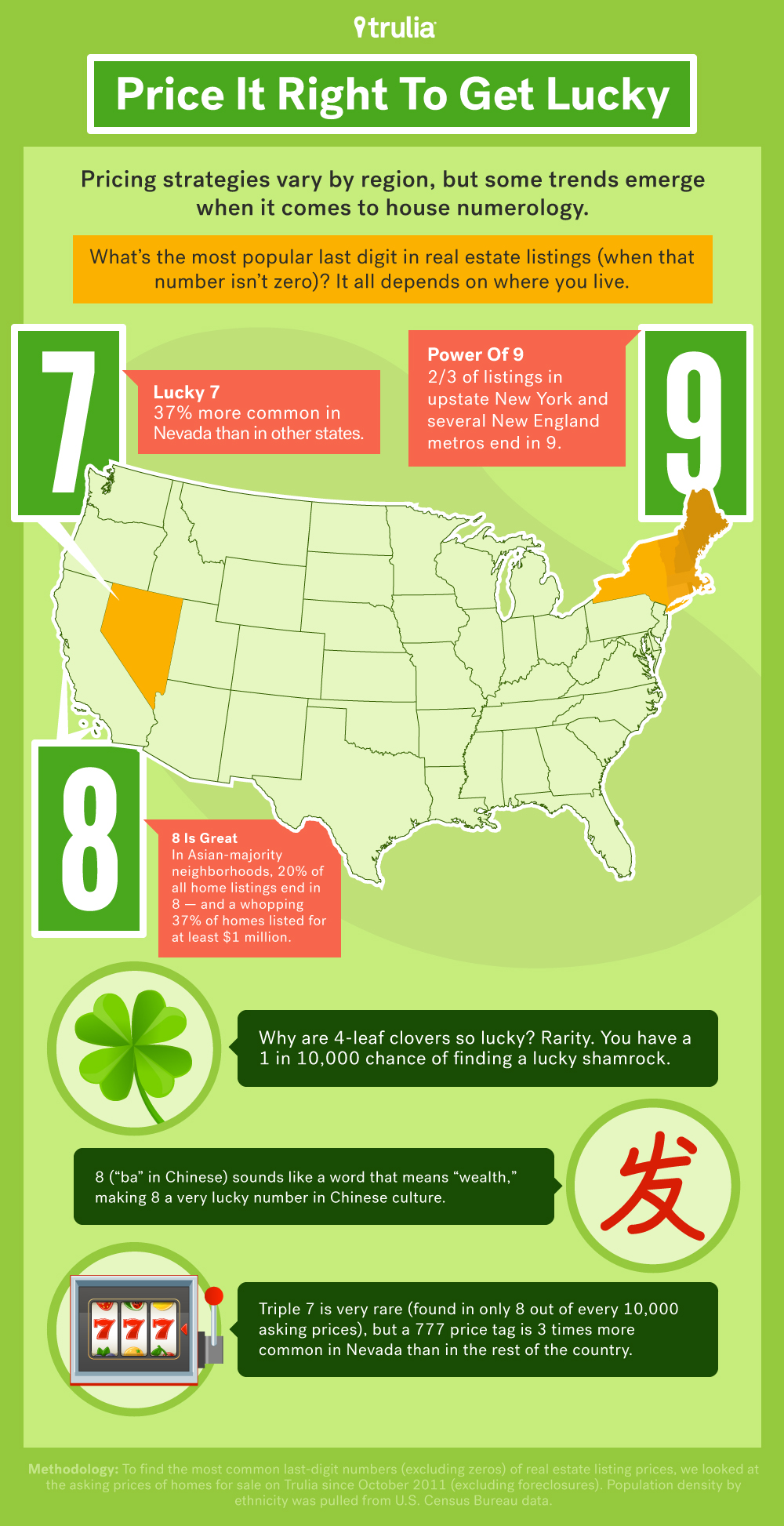 What numbers are best for pricing real estate?

When it comes to the last digit of your home’s listing price, choosing a 7, 8, or 9 can be a solid strategy for a variety of reasons — especially if you can match the numerals in your listing price to where you live. In Nevada, where 7 is the number you want to see on slot machines, you’re also 37% more likely to see a listing price of a home for sale in Las Vegas, NV, end in 7. And what about hitting the jackpot with a 777? You’re three times more likely to see that lucky trio appear in the asking price of a home for sale in Nevada than anywhere else in the country.

It also pays to consider cultural beliefs and values. In Chinese culture, the number 8 has special significance — including house numerology. The Chinese word for 8 (pronounced “ba”) sounds very similar to the word for “wealth” or “fortune” (pronounced “fa”), making it an auspicious number. Perhaps that’s why so many of the real estate listings in Asian-majority neighborhoods (the U.S. Census doesn’t differentiate between Chinese and other Asian backgrounds) include or end in the number 8.

When to reduce a home’s sale price?

When it comes to bargains, it pays to look for the number 9. From clearance items that end in .99 to the good ol’ 99-cent store, prices that end in 9 tend to signify a deal — and that logic definitely holds true in real estate pricing strategy.

But here’s where shoppers looking for a real estate deal might want to pay attention. Only 25% of homes priced at $1 million or more have a 9 as the last digit, compared with 53% of all listed homes. Taking it even further, homes with a price reduction are more likely to have a 9 as the last digit than the original price was. Bottom line: If you’re looking for a deal, stick with 9. 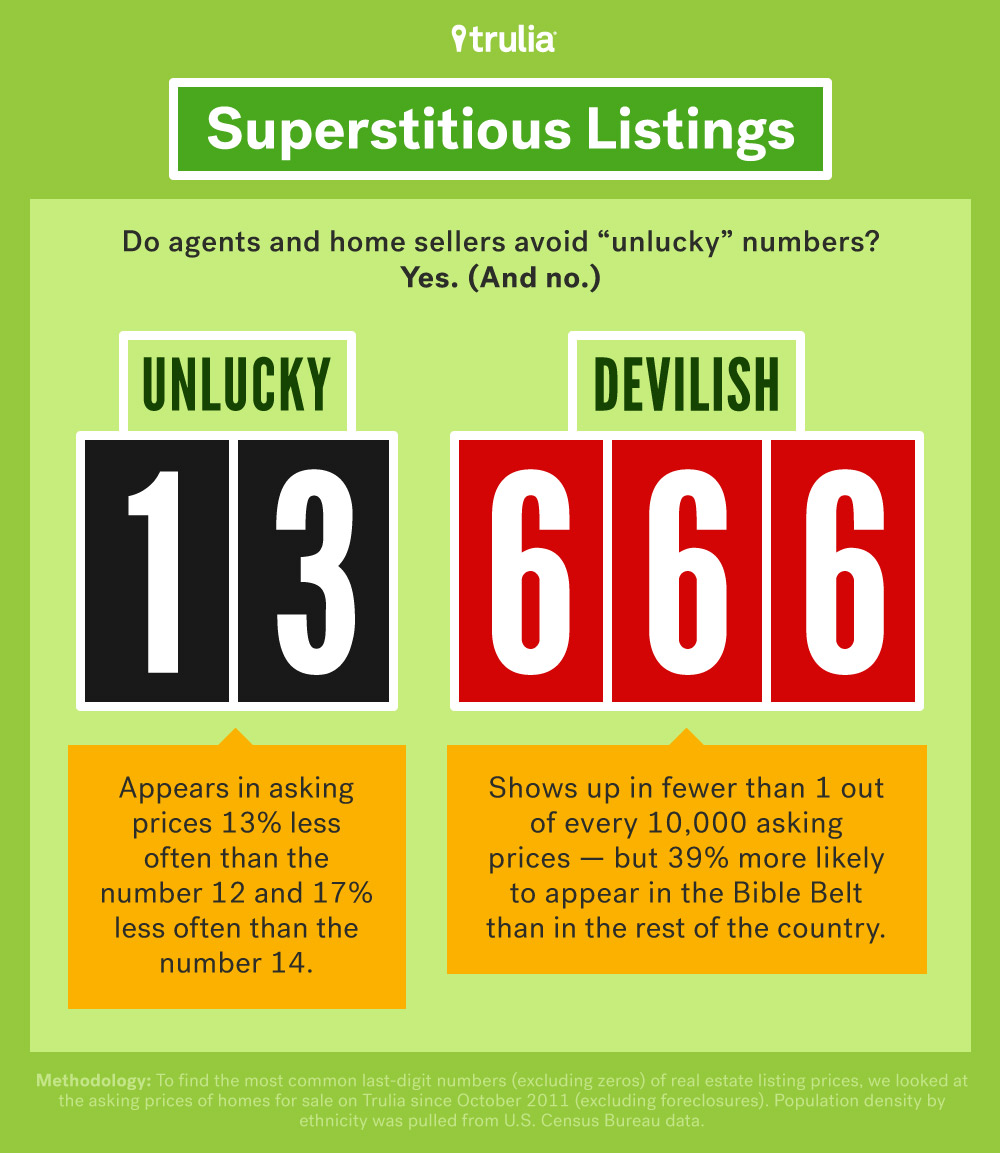 What are unlucky numbers?

If you’re feeling superstitious when it’s time to sell your home, good news: your buyers probably are too. So go ahead and bury that statue of St. Joseph upside down in the yard and don’t hesitate to avoid notoriously unlucky numbers — such as 13 and 666 — in your listing price.

Unlucky 666, also known as the “devil’s number,” shows up in fewer than 1 out of every 10,000 asking prices. But what about the Bible Belt, which covers most of the South, aside from South Florida, and is disproportionately Baptist? (For our analysis, we used the Association of Religion Data Archives to identify counties with high shares of Baptists.) Homes for sale in the Bible Belt are actually 39% more likely to include 666 than homes for sale in the rest of the country.

Do you believe in house numerology? Did lucky numbers factor into your real estate pricing strategy? Share your good-luck charms in the comments below!