“Bogey and Katharine Hepburn were going down that little canal in The African Queen, and I thought of this house, and the stream running right underneath, and I came up with the idea.” So recounts Michael Willhoit, Porsche and Ferrari exotic-car dealer and owner of the 6-acre, 3,300-square-foot home for sale in Springfield, MO, he named for the 1951 film. Willhoit spent a total of 10 years on the project, by his calculation: The idea was born in 2007, when the house still belonged to someone else, marinated for another six while Willhoit busied himself collecting custom, handmade, and recovered antique pieces for his dream home, became a reality in 2013 when he was finally able to buy the home and its surrounding land, and then culminated with a two-year, round-the-clock renovation to create what is now a one-of-a-kind, museum-worthy property dedicated to the continent Willhoit fell in love with while on safari in 1972. Now, the estate and its entire contents are on the market — for sale by owner — for $15 million.

While most of us don’t have the kind of capital to acquire our very own homage to Africa, Willhoit walked us through the home on a virtual tour, sharing some of the stories behind his labor of love that has been so long in the making. 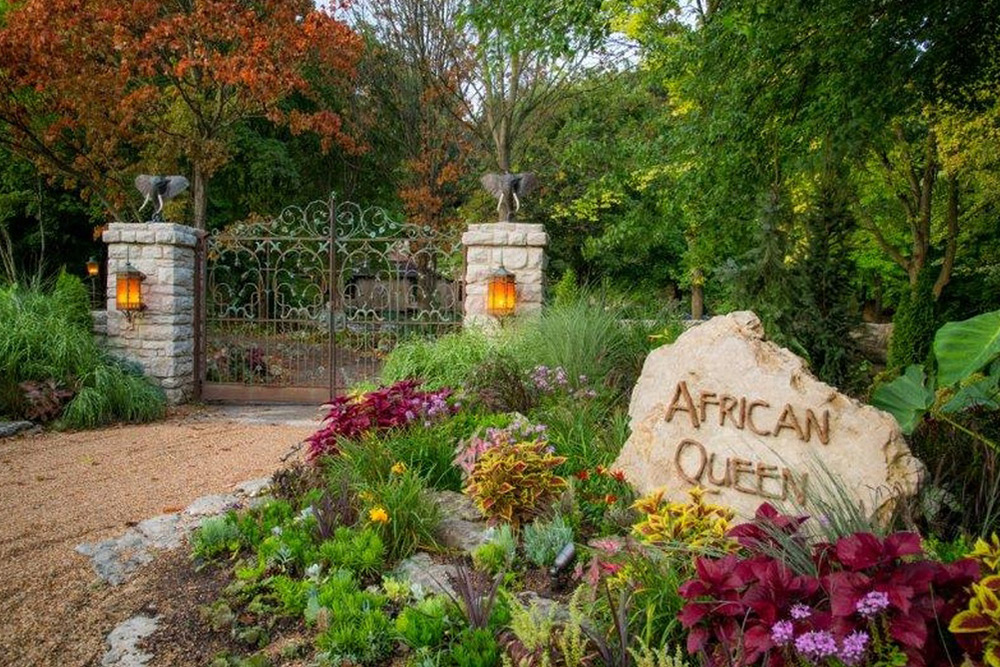 “The fence looks like sharp toothpicks, right? Well, a lady in the neighborhood drove by one day and complained to the city, claiming that it would harm animals,” says Willhoit. (The city decided the fence is not a risk to local wildlife.) From the outset, the creation of each and every element on the property was closely supervised by Willhoit himself, and the surrounding community has been curious from the start. The property was already legendary before Willhoit bought it — 6 acres inside Springfield city limits is a bit of a rarity — and the African Queen has opened its doors to the public only once: for a $2,500- to $10,000-a-plate fundraiser for the Friends of the Zoo. Even without an invite, neighbors can catch a glimpse of exotic charm when Willhoit and his wife take their 1967 Land Rover (repainted with zebra stripes) for a spin. The couple dresses up their two golden retrievers in lion manes, and the crew piles into the car so people in the neighborhood can spot a couple of “wild” animals in the back of a safari-themed truck, just cruising through Springfield. 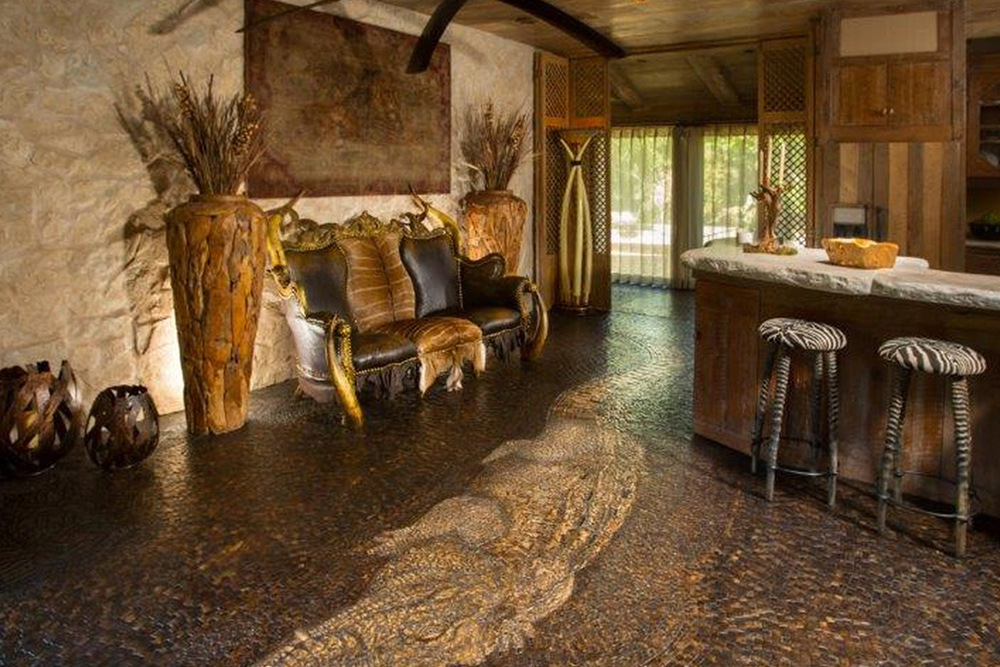 If an award were given for hardwood floors, certainly the African Queen’s $400,000, 900-square-foot, reclaimed-wood mosaic would take the cake. Well, surprise! There is an award and the home’s floors have raked in multiple accolades. In 2016, the National Wood Flooring Association named the African Queen’s floor Best Residential Wood Floor, Members’ Choice, and Best Reclaimed Wood Floor. The pièce de résistance at the center of the kitchen is a 17-foot, 3-D crocodile inlay constructed from 20,000 pieces of oak, walnut, and ebony. 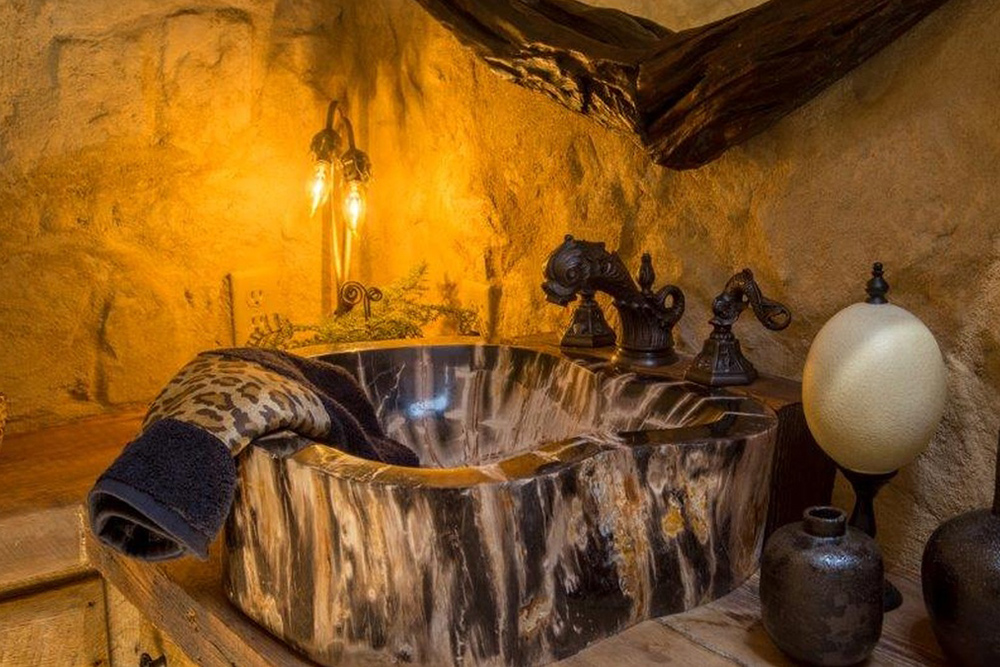 The sink in the master bath is made from 3,000-year-old petrified wood. The stunning (but not award-winning) floors in this space aren’t quite as old, but are just as impressive: They were reclaimed from a circa-1750 building in Indonesia. 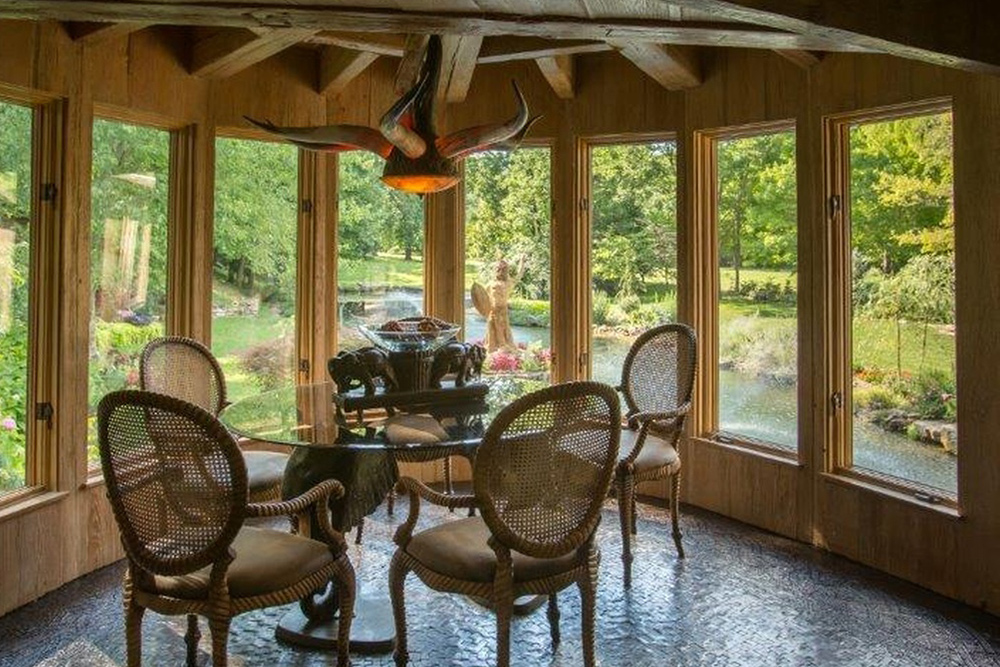 When renovating the property and designing the landscape, Willhoit had one vision: that everywhere you looked, you would see water, and he wanted the grounds to be bursting with color. “I’m just 6 miles from the city center, and it’s like you’re in a different world,” he says. “It’s an odyssey.” Besides stocking the stream that runs underneath the house with trout, he had a flat dam built to provide a constant flow of water. 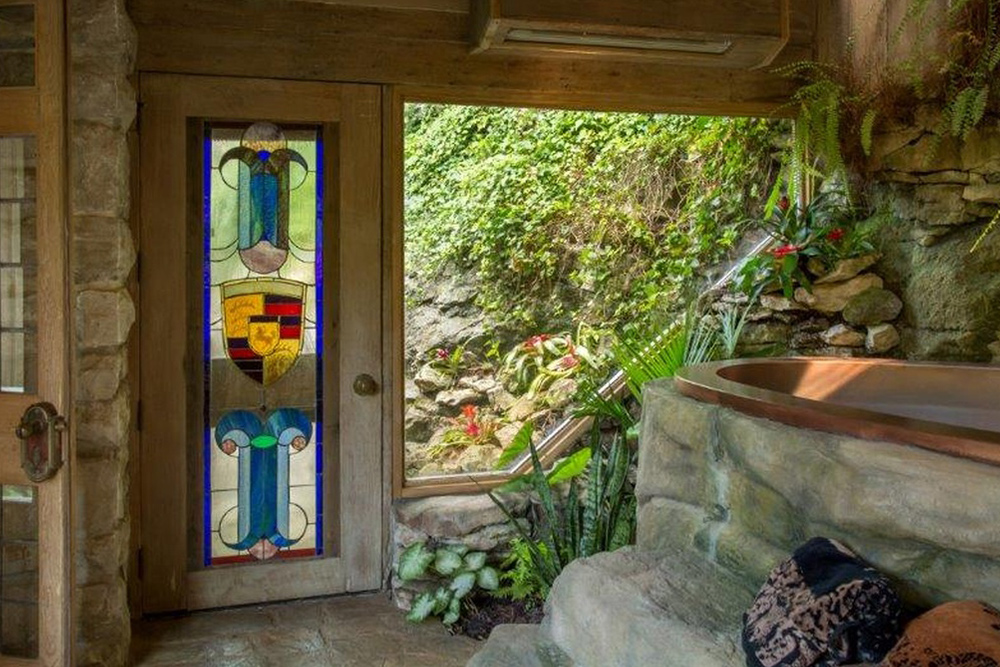 One particularly eclectic room is the Bluff Room, flanked by a stained-glass door on one side and built into the side of a cliff on the south side. Look closer at the stained glass, and you’ll notice it’s not a traditional coat of arms — that’s the Porsche insignia in the center. As a 40-year veteran in the car business, Willhoit holds this door as one of his most prized possessions; it was given to him by his late first wife. “I’ve been rich, I’ve been broke, and that glass has come with me,” he says. 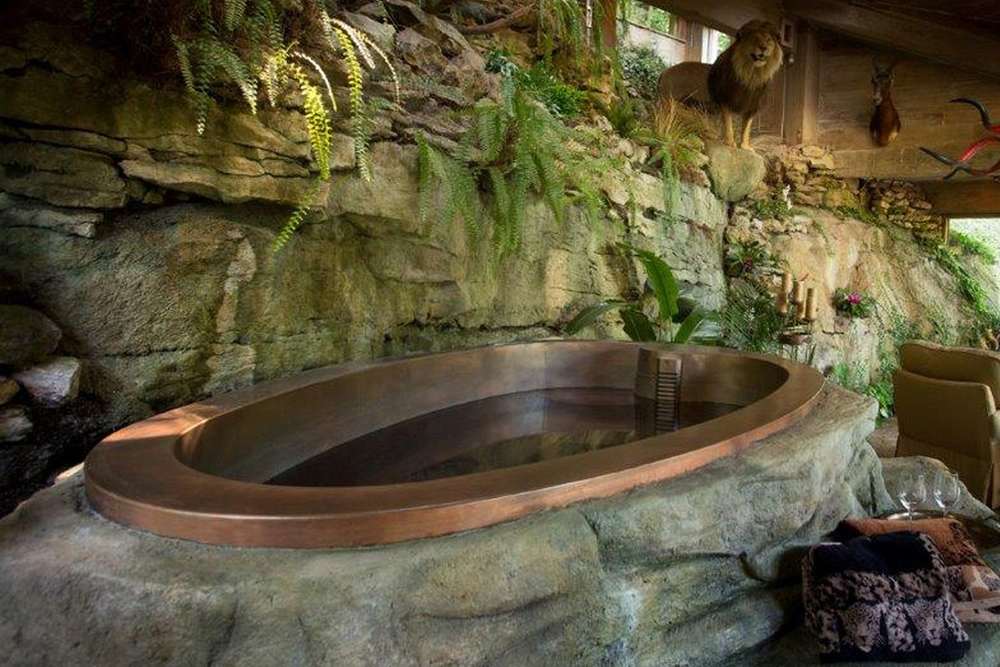 The hot tub that sits at the base of the living wall, beneath real ferns and the watchful gaze of a 650-pound lion replica, was custom-made in 100% copper and built right into the cliff. 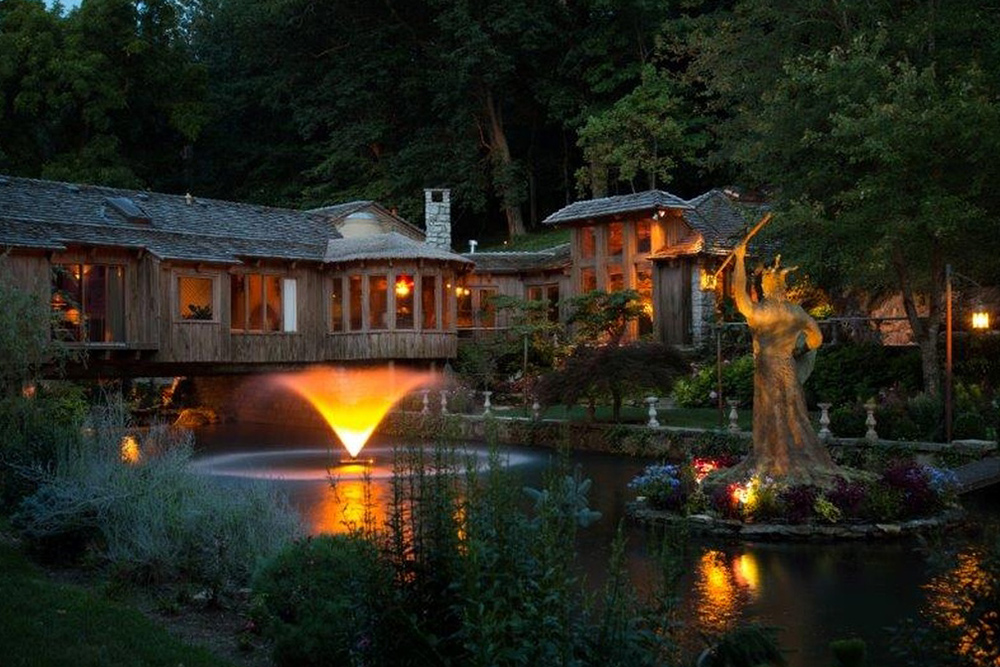 At night, 150 hidden lights are illuminated to showcase the property’s dramatic water fountains, falls, and, of course, the African Warrior statue, who keeps watch over the Queen. 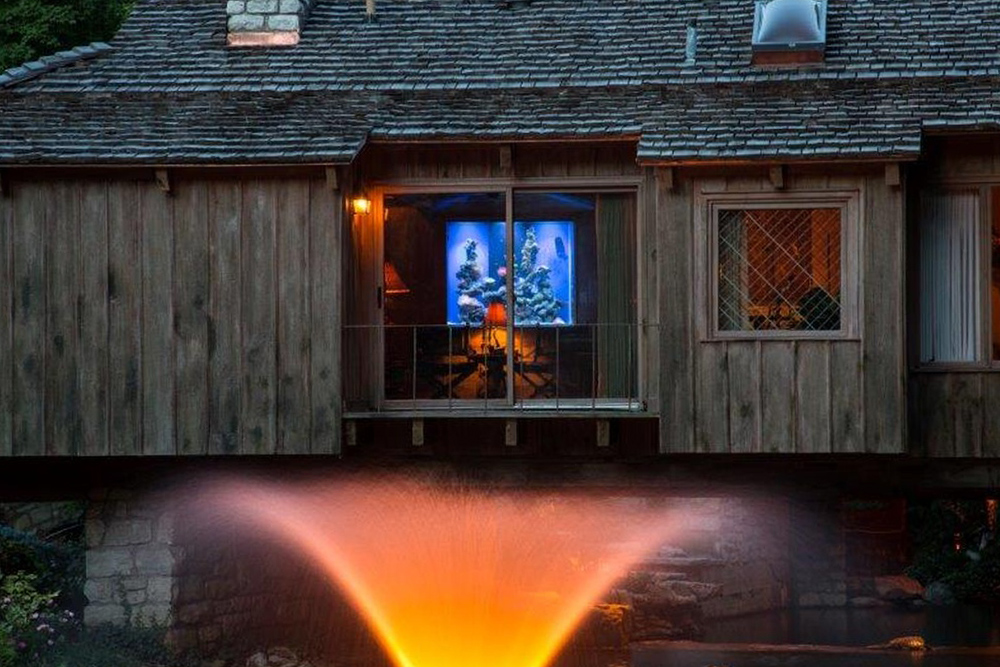 A custom-built, nearly 6-foot-long saltwater fish tank is home to a variety of species native to the coasts of Africa. It was located so that it is framed by the window and reflects off the window in such a way that it’s lit up and visible as you ramble up the driveway into the property. 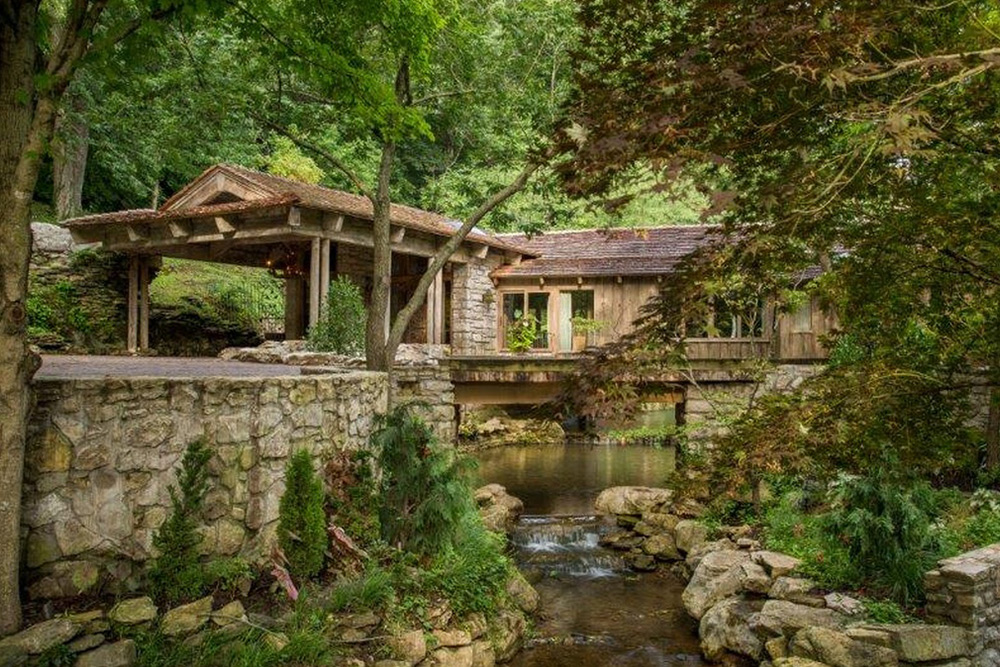 Although rumors ran rampant about people stomping on and even sleeping on a glass floor over the stream, before Willhoit moved in, there wasn’t actually a glass floor in the home — so he added one. (All the better to watch the trout swim by!) 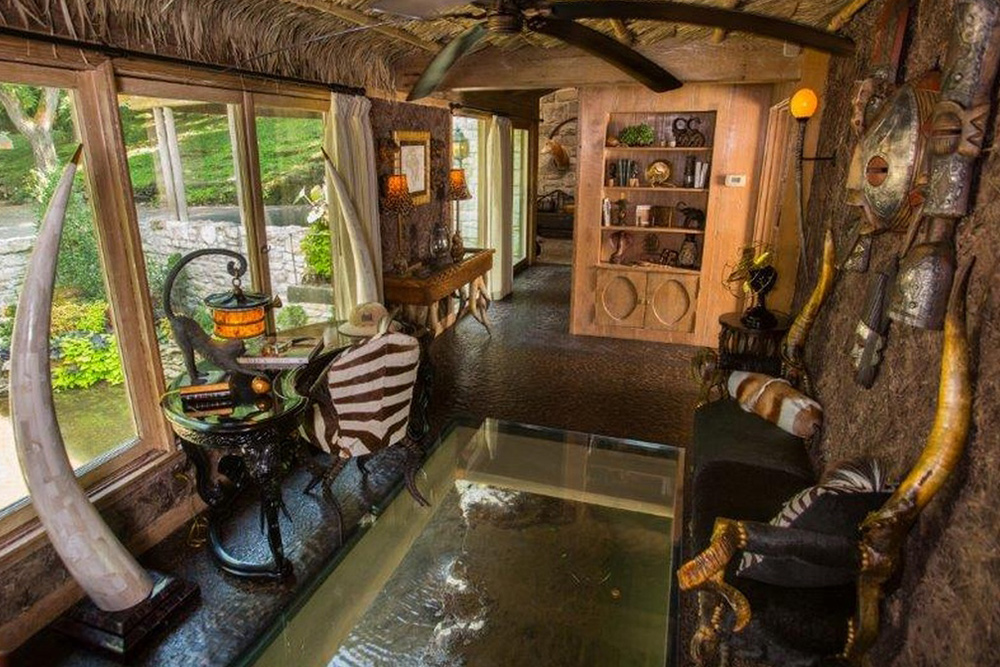 “Anyone can put up some crown molding and dress up their house,” says Willhoit. “I want to be different. The last thing I ever want to be is normal.” The list of details and special finishes extends to every surface and furnishing in this spectacular home, from the elephant painting in the master bedroom (made by a 13-year-old girl in Johannesburg) to the 80-inch blade swings on the bent-blade ceiling fans. Willhoit even commissioned a 57-page coffee-table book about his home — so if the $15 million price tag is out of range, you can always settle for a photo series.

Would you live in this extra special luxury home? Check out the image gallery and listing for this home at 2829 S. Lone Pine Ave., Springfield, MO 65804, then tell us which space you love most in the comments below!