We live in the Pinterest Age, where every aspect of one’s home must look good — all the time. That includes your unsightly television. The clunky black box of your childhood has given way to an oversize flat panel. It’s good in the sense you no longer need an extra-deep armoire to camouflage your equipment, but bad in the sense that the television’s surface area has grown to unprecedented proportions. And as most any man will tell you (sorry to seem sexist, but you likely can’t build a case against this one), bigger is better.

According to a highly unscientific search on a popular big box electronics store’s website, its best-selling flat-panel TV is a whopping 50 inches. That’s almost four feet wide. (Screens are measured on the diagonal.)

What are you left with? An enormous expanse of glossy black electronics spread across the wall.

With shelfies eclipsing selfies among those of us who covet sheepskin-strewn Wishbone chairs more than embossed leather Louis Vuitton handbags, that electronic monstrosity simply. won’t. do.

So with co-habiting harmony in mind, I’ve pulled together half a dozen solutions for integrating modern-day televisions into Pinterest-worthy rooms. 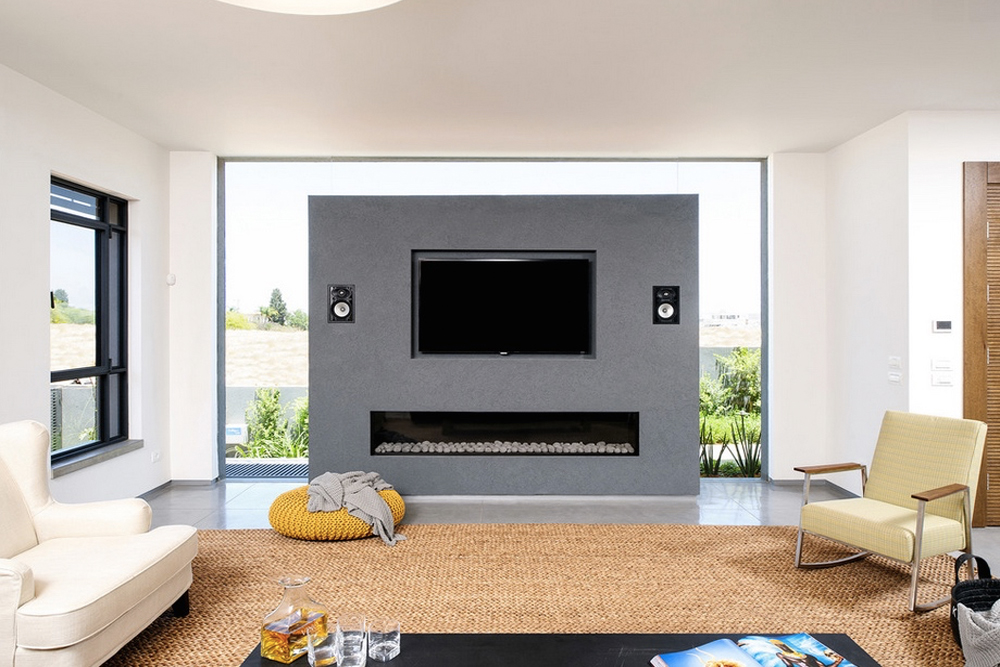 While many like to hang the TV in the pride of place — over the fireplace — I can’t in good conscience advise this. One word: No. (Seriously. Just no.) Art should hang over a fireplace. And putting up a digital Mona Lisa does not count. Plus, in most cases, your television will be hanging much too high. You will get a stiff neck after one episode of Breaking Bad, let alone a weekend binge.

There are exceptions, however, like this ultracontemporary home in Israel in which a free-standing wall accommodates a television and gas fireplace quite chicly. If you’re building from scratch, scour the Web for such ideas. 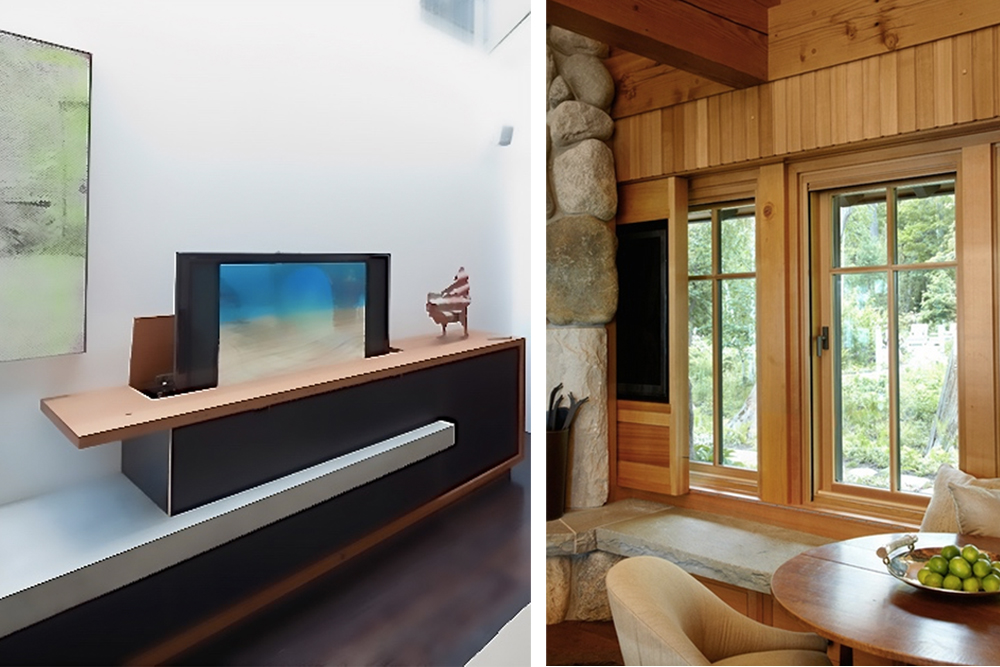 Photo on left by Brett Boardman; photo on right by Werner Straube

You can go all-out gadget-y with a pop-up solution. They’re often seen in bedrooms, but are equally effective (although slightly silly) in public spaces. If you’ve got the cash, you could commission a custom credenza such as the one designed in the living room on the left designed by Australian architect Sam Crawford. In the family room on the right, Chicago-based designer Tom Stringer integrated a pocket door setup where a quite large television slides out for viewing. 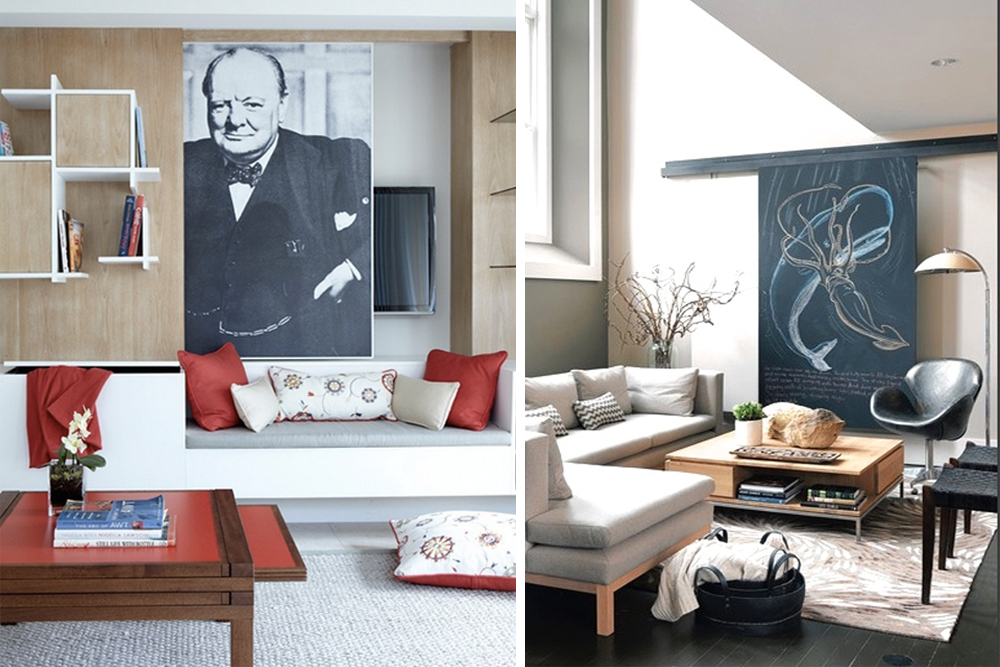 Photo on left via Eoin Lyons Interiors; photo on right by Nat Rea

Back to the art conversation: Rather than employ a plain wood or painted panel to slide in front of the screen, why not get whimsical? In the family room on the left, Dublin-based Eoin Lyons Interiors used a digital rendering that disappears behind a wood accent wall with bookshelves, and even incorporates built in seating for when the TV is not in use. Kristine Irving of Boston-based firm Koo de Kir hung a large chalkboard panel on a sliding-door track mounted on the wall to conceal her clients’ 50-inch flat screen, adding a bit of an industrial edge to the space. 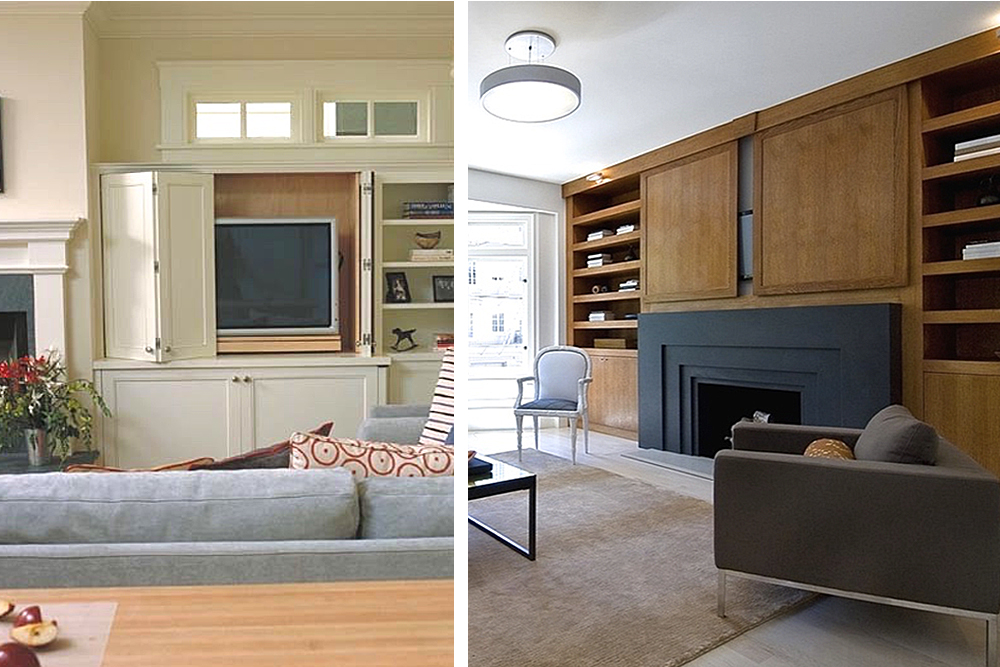 Photo on left via Mahoney Architects & Interiors; photo on right via EAG Studio

Traditional custom (but not over-the-top-expensive) built-ins still get the job done.Mahoney Architects & Interiors went with simple built-in bookshelves in the Mill Valley, CA, family room on the left. Bi-fold doors accommodate the extended width of the flat-screen television.

In a more upscale display of custom cabinetry, EAG Studio of San Francisco designed beautiful wood bookshelves and sliding panels to conceal a television hung above a honed Brazilian slate fireplace surround. Still, I maintain that the placement is a bit high. 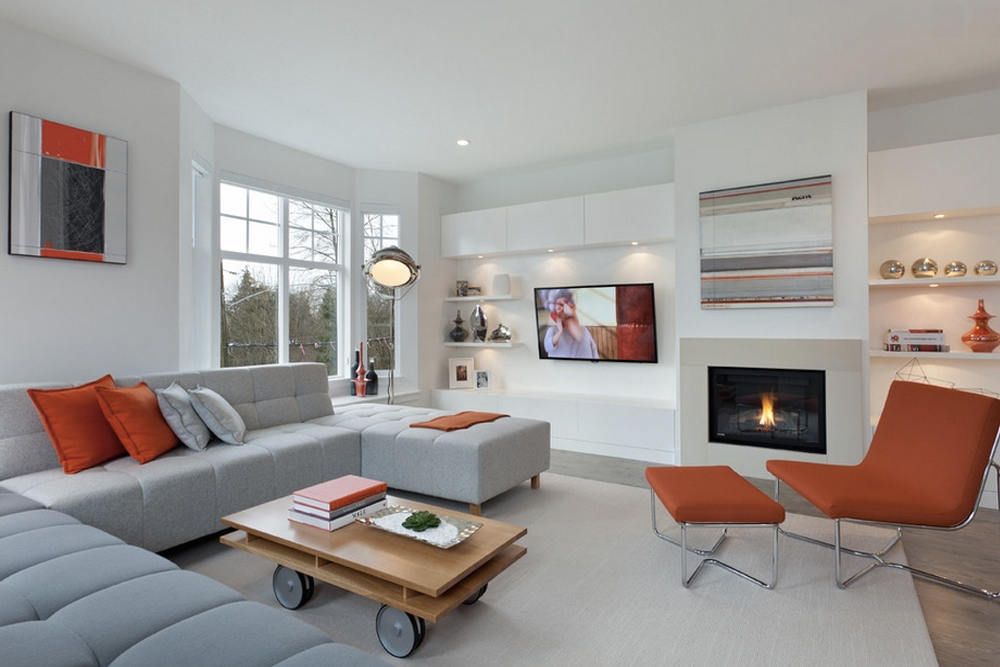 Portico Design Group designed this contemporary family room in Vancouver using white cabinetry and accent panels. Much to my delight, there’s art over the fireplace, with the flat-screen TV hung off to the side, in an asymmetrical arrangement. It’s not hidden, but it works. (Especially when it’s turned on and tuned in to an image with a coordinating color scheme.) 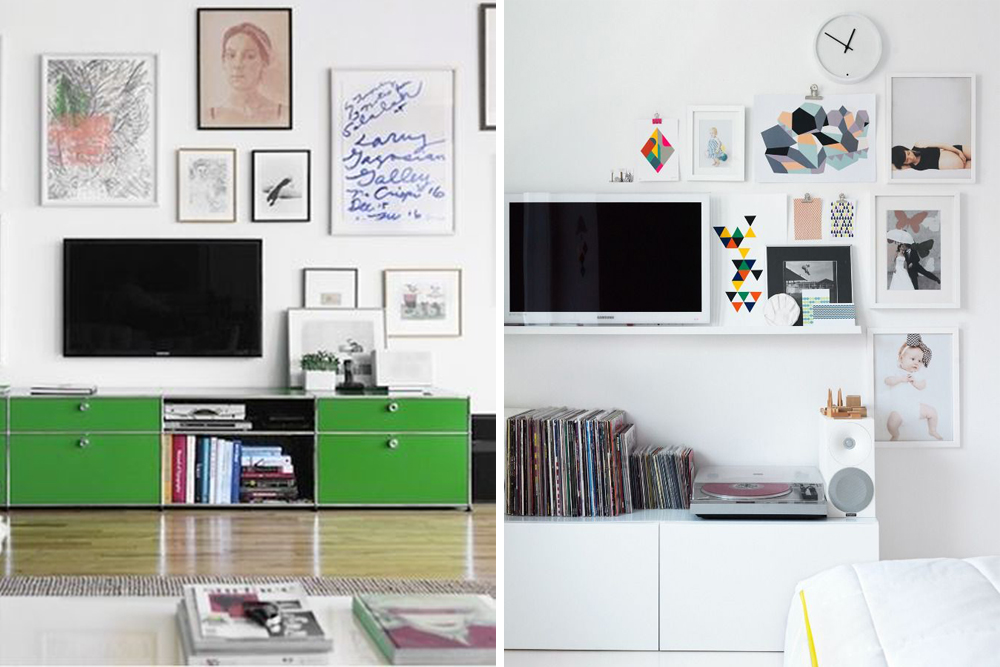 Photo on left via Skona Hem; photo on right by Petra Bindel for Dwell

Finally, for a more casual and absolutely more accessible look, simply affix the TV to the wall, or perch it on a no-frills shelf, then curate an art gallery around it. In the photo on the left, a loft in the DUMBO neighborhood in Brooklyn gets a funky treatment with a bright green, low-slung credenza (note that the TV is hung above the unit, instead of resting atop) and an array of artwork.