I’m lucky enough to have a summer place on Cape Cod. While the structure itself is fairly traditional, inside there’s an open plan with all-white walls, light oak floors, and plenty of sun. It’s sparsely furnished, by choice, with clean lines and white upholstery, and pretty much no art on the walls. And I like it like that.

Admittedly, in photos it looks slightly unfinished, almost stark, but it’s a getaway, not just from city life, but from the material possessions that clutter my life. As much as I’d like to live similarly at home in Boston, it’s just not realistic, especially with a family.

Aside from strict modernists, most people can’t live such a spare existence daily, or even want to. But still, that’s no reason to eschew all-white (or at least mostly white) interiors. Nothing’s better than crisp, clean white walls, especially if you can add comfort and character with — restrained! — color and texture.

Here are five ways to warm up white living rooms. 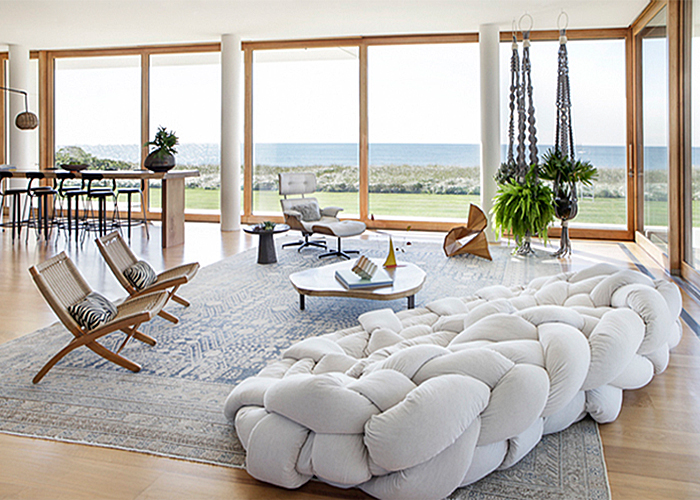 Natural elements can bring warmth and texture to a space. Photo by William Waldron

The Southampton, NY, home of interior designer Kelly Behun is a sleek, modern marvel by architecture firm Sawyer | Berson, but the interior, which Behun designed solo, reflects that casual air of its beach locale. With all that openness and sunlight, the room could quickly seem stark, but the wood-framed floor-to-ceiling windows, wood dining table, and living room chairs add a pared-down taste of nature. The subdued yet traditional rug, whimsical sofa, and chunky macramé plant hangers infuse additional warmth, textural interest, and an air of casualness, while still maintaining a contemporary vibe. 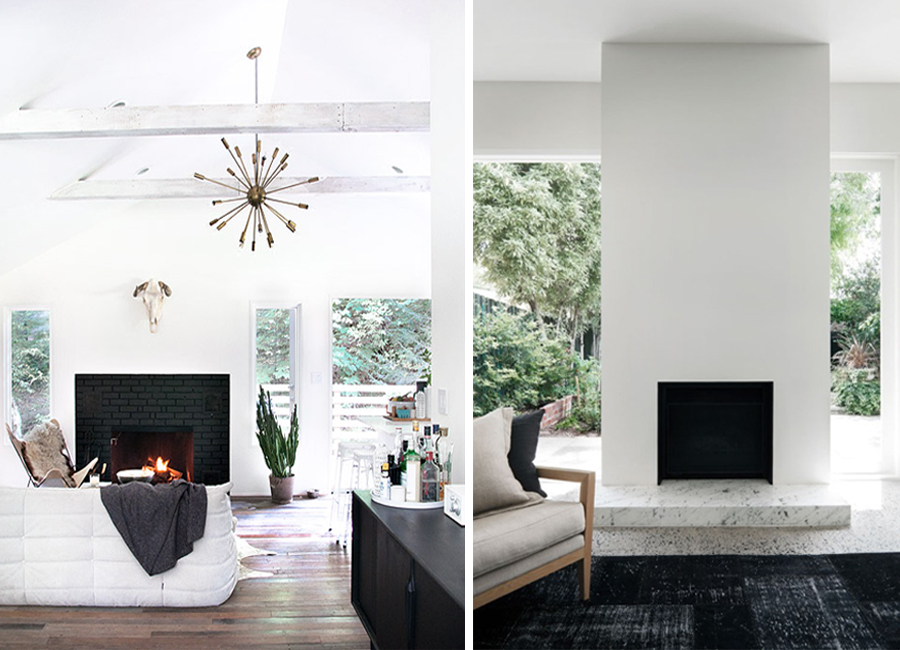 You can  black in an all-white room to soften the overall look. Photo by Maxwell Tielman for Design Sponge (left) Photo by Christine Francis for Yatzer (right)

Pairing white and black can often be a recipe for hard-edged minimalism, but these all-white rooms use black to help ground rather than provide jarring contrast. In the Catskills getaway on the left, which is painted in Pratt & Lambert “Silver Lining,” the black-painted brick fireplace holds one’s attention as the room’s focal point, while the ebony wood credenza provides a clear border on the right. The brass sputnik chandelier, salvaged raw wood floors, and whitewashed beams above add patina.

An overdyed black rug grounds and softens the minimalist living room on the right, in a Victorian home in Melbourne, Australia, designed by Georgina Jeffries and Pip McCully of Wonder Design. 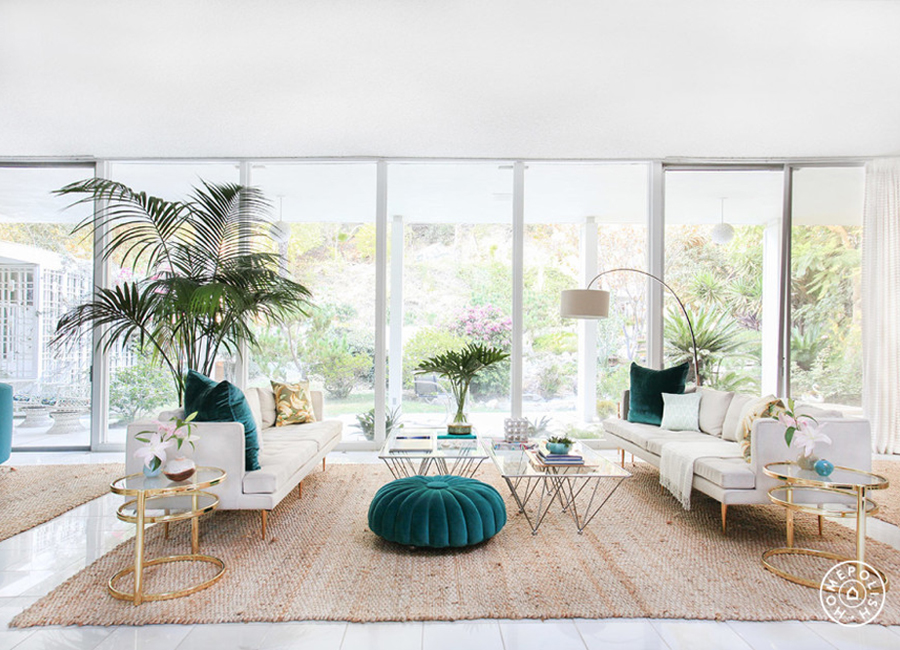 Use beautiful accents to bring a bit of glam. Photo by Tessa Neustadt for Homepolish

Designer Orlando Soria, the West Coast creative director of interior design service Homepolish, put together this casual glam living room in Palm Springs, CA belonging to best-selling author Kelly Oxford. Surrounded on every side in white, with frameless floor-to-ceiling windows with plain white curtains and glossy white wide-plank floorboards, not to mention modern white sofas, the space could easily read as sterile. The neutral rug (love that he resists the same-old, same-old sisal) adds a homey touch and honey glow, while the triple-tier brass side tables announce a glam girl lives here. The tufted teal ottoman is equally feminine, and potted plants bring the lush landscape in. 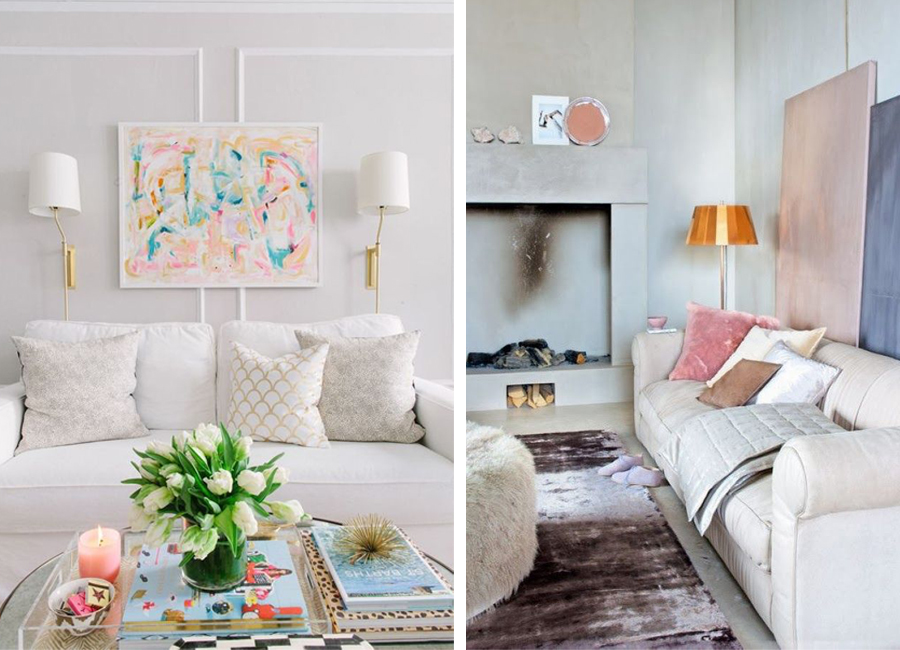 Pastels in an all-white room can help create an inviting environment. Stoffer Photography for The Everygirl (left) Photo by Anne de Leeuw for VT Wonen (right)

In the living room on the right, styled by Marianne Luning, pink tones (and undertones) in mottled finishes match the almost unfinished character of the concrete walls. The soft lines of the sofa and plush fabrics, from the rug to the velvet pillow to the shaggy sheepskin ottoman, complete the inviting effect. 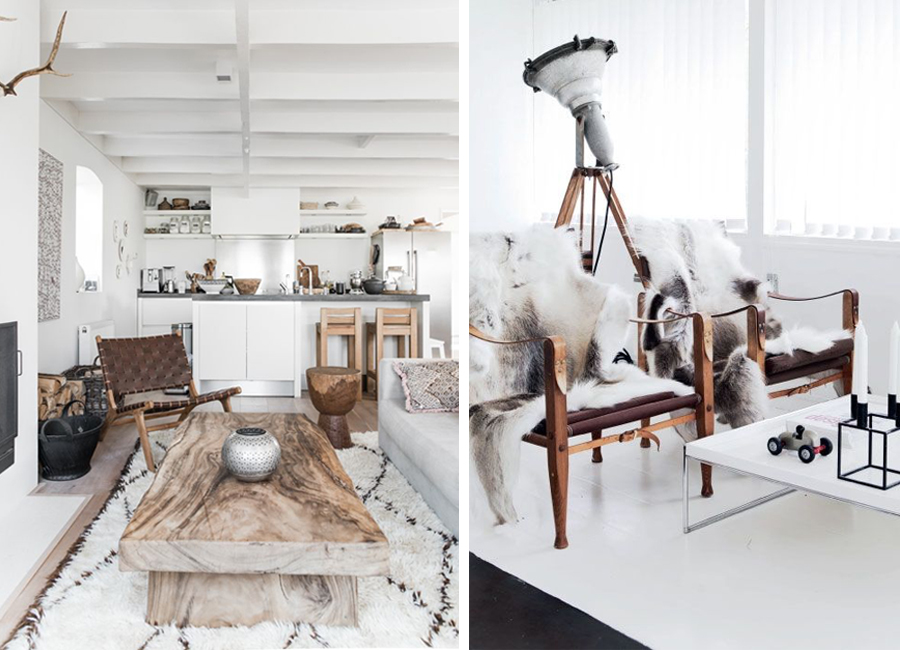 Mix vintage and modern design elements for a cozy feel. Photo by Paulina Prcklin for The Style-Files (left)
Photo by Pernille Kaalund for Femina (right)

Danielle de Lange of interior design blog The Style Files swathed her 100-year-old farmhouse in neutral colors and natural textures, creating an earthy feel she describes as rustic chic. Combining vintage finds and modern pieces, including antlers and a table that still resembles a tree, aboriginal artwork, and wooden stools, the room is both primarily white and absolutely cozy.

On the right, Danish fashion designer David Anderson uses vintage finds, like a movie lamp spotted in Copenhagen, to lend an industrial feel to his otherwise modernist white house. Safari chairs draped in animal skins add to the rawness.